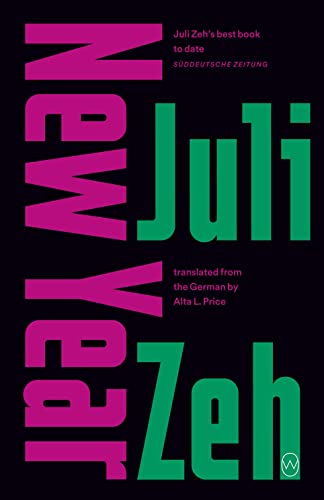 New Year is a novel about uncontrollable panic, repressed trauma, and the psychological patterns that persist in their aftermath. In the main character repressed memories for over 30 years have been denied or forgotten by all who experienced or witnessed what happened.

We meet Henning, a German middle-aged publisher's editor, on a challenging bike ride on Lanzarote, a resort town in the Canary Islands. This bike trip, riddled with debilitating panic attacks, is a metaphor for his mid-life crisis. "He doesn't like old women in general, but one day he'll be living with one. He likes old men even less, but also knows that someday he'll be one."  This was supposed to be a much-needed family vacation.

On New Year’s Day, his highly successful wife Theresa and two very young children—Jonah, age four, and Bibi, age two—are at their modest apartment near the beach.   “New Year, new you!” he chants as his personal mantra as he forces himself to bike up the hill, dehydrated, muscles rebelling, and rife with panic attack after panic attack. "Between these fits he's tormented by fears of the next fit. They make it difficult for him to even notice anything else."

Both Henning and Theresa claim they love Jonas and Bibi, even though their children, like all children, can be a nuisance with their clinging, demands, and whininess.   "Sometimes he looks at Theresa and the kids and knows he loves them but doesn't feel a thing." The two parents seem to be always negotiating about which one will be "stuck" with childcare. Tensions smolder beneath the surface, but the reader does not know why. Henning is paralyzed by his fear: "his fear of these episodes still allows him to function in everyday life. But they turn into a living hell. He's all alone, trapped in his own personal purgatory."

Henning—as a very young child—is described with a young boy's perceptions but not his voice. His son Jonas and his daughter Bibi are almost the same age as he and his little sister Luna when the "inciting incident" (his childhood trauma) occurs. Both little girls Luna and Bibi are whiny, pre-verbal, and not potty-trained. Both boys—Henning and his son Jonas—are precocious, analytical far beyond their age, and mostly proud of being a big brother.

The style of New Year is told in the third person, with almost no dialogue—except internal—making for a peculiar reading experience. The first half of the novel is almost entirely devoted to the adult Henning and his panic attacks, which are viscerally portrayed to the point that the reader can imagine what it is to experience one.  However, the proportion of the narrative devoted to the bike trip and the psychological terror is out of balance with the major plot. The reader can sense Henning's ordeal almost immediately, without the need for so many pages describing it. This weakens the story and sags, making it lose momentum. The drama really only begins to engage the reader at the novel's midpoint, when the dark heart begins to beat.

The production of the English translation of New Year in paperback format has need for improvement.  American readers are used to page breaks and chapters. In the translation by Alta Price (paperback), there are only two breaks that look like chapter separations but without numbering or titles: at page 147 (a major shift in plot and a flashback to Henning's childhood), and page 261, the descending scenes after the climax. Without even a double-spaced break to indicate to the reader a different time and place, this reader found the continual flashbacks vertiginous, Absent customary spacing and formatting structure, the timeline and structure of New Year seem jarring.

While New Year has plotted out an unusual and extraordinarily vivid inciting incident and climax—almost voyeuristic in its exploration of unknown territory—slogging through the first half is tedious at best. With so many extraordinary novels to read with engaging and riveting themes focused on parenting dilemmas—even trauma—this one is not among them.