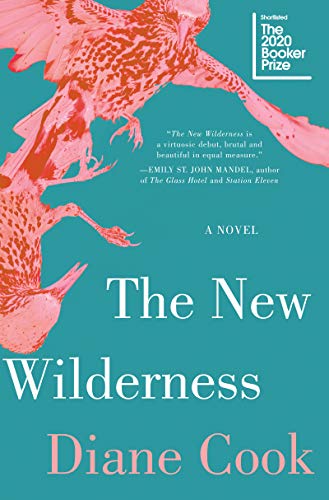 What’s new and especially refreshing about Diane Cook’s new novel, The New Wilderness, are the finely drawn women characters, especially Bea and Agnes, refugees from “The City,” who are caught in a classic mother/daughter struggle that sets the story on fire.

Wilderness writing, which is at the heart of American literature—think James Fenimore Cooper, Mark Twain, Walt Whitman, and even Emily Dickinson—isn’t devoid of women and girls. Cooper featured two sisters in The Last of the Mohicans, an international bestseller.

Twain depicted women folk who try to keep a close reign on Huck Finn before he goes down the Mississippi with Jim, an escaped slave, and both Whitman and Dickinson portrayed females who break the rules laid down by the patriarchy.

In the 17th century thriller, A True History of the Captivity and the Restoration of Mary Rowlandson, the author tells a harrowing tale of a wife and mother kidnapped by Indians that sold well and played on Puritan fears of the indigenous inhabitants of the North American continent.

Two hundred years later, in O Pioneers!, Willa Cather created a frontier woman named Alexandra Bergon, the daughter of immigrants, who survives and thrives in the “wild lands” on the Great Plains better than her brothers.

Yes, women and girls have played major roles in frontier American literature, but on the whole they have been in the shadows of men like Jim and boys like Huck.

Cook corrects the gender imbalance, and, though she offers more than enough guys, she hones in on Bea and Agnes who keep a step or two away from “The Rangers” who stalk them and who can be as menacing as real life bounty hunters.

The trouble with The New Wilderness is that it’s too long, takes too many pages to get going, and wanders all over the place before it begins to dramatize the push and the pull between mother and daughter.

Cook might have cut the book by half, made it as compact as O Pioneers! and opened the story with a bang.

At times the writing is exciting. Also, at times the author’s psychological insights into her main characters can captivate the reader.

A dystopian fable that's set sometime in the future, when civilization has crumbled, Cook’s landscape is a mythological place called “The Wilderness State.” It’s a kind of living laboratory to test human endurance without the tools of civilization.

Not far from the Wilderness State,” there are “the Private Lands,” inhabited by people of wealth and power, and a “Manufacturing Zone.”

The wilderness folk belong to two main groups, “The Originalists” and “The Newcomers.” Jack London presented very similar categories in his novels and tales set in the ice and snow of the Yukon.

Like Cooper, whom he aimed to mimic, London had Indian characters who seem like cardboard cutouts. London also had dogs named Buck, White Fang, and Batard.

Cook has plenty of animals, but she wisely doesn’t have Indians. Most white writers, including Cooper, have faltered when they tried to depict fictional members of Native American tribes.

As Luther Standing Bear wrote in Land of the Spotted Eagle, “Only to the white man was nature a “Wilderness and only to him was the land ‘infected with wild animals’ and ‘savage’ people.”

Few Americans had understood that perspective.

In Part VII of The New Wilderness, which is titled “The Roundup,” Cook chronicles the war between “The Rangers” and the folk who hear to live in the wild.

She introduces a new group called “The Maverick” who might have appeared in Part I, which is called “The Ballad of Beatrice” and that begins with an abortion and the death of a girl that doesn’t have the emotional punch it might have had.

Cook packs a great many wilderness metaphors, tropes and images in The New Wilderness. She’s clearly familiar with the literary legacy of writing about trees, woods, and forests.

Fans of wilderness writing might discover that the book appeals to their sensibilities. Readers who find the going rough at the beginning of Cook’s novel might persevere.