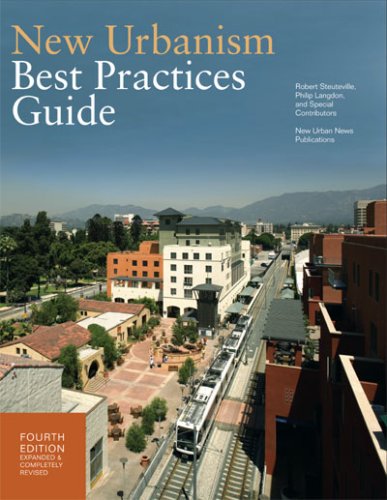 Addressing the role of urban placemaking in the context of the challenges of contemporary society, authors Robert Steuteville and Philip Langdon observe, “While the world has big issues, we should not forget that the built environment effects everyone’s quality of life in small but important ways.” If anything, they vastly understate the importance of the places of the built environment and, therefore, their book.

In surveys of what people most miss and therefore most long for, a sense of community regularly ranks in the top five. While many factors contribute to creating, enhancing, and sustaining community, the importance of the physical scale, form, appearance, and overall appeal of the built environment—the collection of structures and forms that make an urban place—loom large.

Whereas once the majority lived and worked on farms, with more than half of the world’s population now living in cities, the urbanization of societal spatial patterns is no longer a growing phenomenon but one of the dominant forces characterizing society in the 21st century. How urban cities are designed and created is a subject of vast concern to all who care about the future of society, their communities, and their families.

Inevitability—for reasons of sustainability, social services delivery, commerce—more people will live in cities. This growing demand for urban living shall be accommodated by the expansion of existing cities, the redevelopment of existing cities, or the development of new cities. With continuing strong population growth, over time, the majority of people will live in newer rather than older urban environments. What planning principles will guide the creation of these new urban places? Will they be new urban—with a lowercase U and N reflecting a continuation of recent practice? Or will they be New Urban—with the capitalized “U” and “N” representing the thinking of a new planning movement?

New Urbanism Best Practices Guide is a handbook of applied principles, practices, and techniques that are essential to great placemaking. According to authors Robert Steuteville and Philip Langdon, “The New Urbanism is traditional urbanism updated to solve problems of modern life from transportation, to retail, to housing, to community, to workplaces, to the environment.”

Beyond the statistical significance of the urban form now dominating nonurban spatial patterns, over the last decade plus, there has been a renaissance of interest in cities, more specifically in places that offer rewarding place experiences, human scale, and access to place-based resources. In practice, this means people want a sense of place, not placeless sprawl. More and more, people favor walkable communities, not suburbs that requires a car to run an errand, visit a park, or enjoy the place itself. In sum, people want to experience and live in places with distinct character.

To appreciate the challenges of urban placemaking in the 21st century, it is useful to consider how societal spatial patterns have evolved over time. Initially, society operated with a hunter/gatherer economic model, involving tribes wandering from and through places, featuring place experienced in smallish groups of people. With the advent of animal husbandry and growing crops, people became place anchored. In the agrarian economy, living and social arrangements were more dispersed, for the land-intensive farming and ranching featured low-density ratios of people per land unit.

With the emergence of small crafts and trading through the Middle Ages, villages grew in scale, leading to more density. Starting in the later 18th Century, the Industrial Revolution, concentrating large numbers of people on manufacturing production lines, coupled with the emergence of mass retailing, prompted concentrations of people in cities, as the proportion of people needed to work on farms continued a persistent, prolonged decline.

The rapid growth of cities, exhilarating as it was, was not without such problems of overcrowding, filth, and crime, as the institutions necessary for civil urbanity lagged the challenges posed by rapid urbanization. In response, especially following the Second World War, a new housing form, neither the country living of the agrarian age nor the high density stacked housing of big cities, emerged in the form of suburbs.

Initially, many of these “streetcar suburbs” were connected to larger cities by rail. But with the advent and aggressive promotion of the automobile, linked to massive federal government funded highway construction, rail was largely phased out and the travel experience was transformed from communal public transit to the isolation of people commuting by personal autos.

At the very times that suburbs expanded, many cities became less appealing. Massive urban renewal projects destroyed once vital neighborhoods, replacing them sometimes with impressive edifices but more often than not with cold, soulless structures, positioned in uninviting, even off-putting plazas. These unhappy consequences and those responsible for them—misinformed policy advocates, all-powerful public development czars, and greedy private developers being the prime culprits—have been much debated in many forums and contexts, including such impactful books as Jane Jacobs’s Life and Death of Great American Cities and Martin Anderson’s Federal Bulldozer.

The cities’ diminished appeal enhanced suburbs’ comparative appeal. Suburbs flourished, its proponents citing such factors as privacy of a detached house and personal land, the accessibility by autos to shopping in the emerging shopping malls located, conveniently in the suburbs nearby to where people lived. Indeed, the expansion of suburban housing and shopping malls was concurrent and reinforcing. But, as popular as suburbs became, their dominance as the primary societal urban form was not sustainable.

Conventional real estate development strategies have evolved from promoting maximum scale and density, achieved through horizontal sprawling development that leads to declining density and longer transit distances and commute times, to advocating “smart growth.” Leading this debate from an alternative perspective is the movement known as ‘New Urbanism.” Whereas the suburbs emphasize the house and private space, New Urbanism prioritizes the communities and public space. This renaissance of cities has been accompanied by great concern about the very character of cities, the essence of urbanity, the particulars of placemaking that provide on the metro scale an efficacious, appealing, functional metro equivalent to Le Corbusier’s dictum of a “house as a machine for living.”

New Urbanism Best Practices Guide instructs how to create great neighborhoods that provide the context for the houses situated in those neighborhoods. Its coverage encompasses policy and urban strategy, the public-private place intersection, elements of parking and landscape, the development process, planning charettes—a community participation exercise intended to source ideas and build consensus—and the basic real estate development disciplines of marketing and finance.

This ambitious volume collects an impressive compendium of lessons learned, strategies and insights, principles and practices. The presentation is enhanced by 800-plus photos, plans, renderings, tables, and other illustrative images that convey and illuminate the broad spectrum on urban placemaking.

The New Urbanism Best Practices Guide merits a wide audience: not just those such as planners, brokers, builders, and professionals directly involved in the property discipline but also those who are responsible for communities, most especially elected officials—and all who work with them—plus community leaders, organizers, and activists. Further, all for whom the experience of places is important and all who are concerned about the destiny of their places will find much highly relevant, useful, even essential content here.

The authors conclude, “It turns out that the urban form works very well in our time, just as it did in the 19th century or in early Greece—even as it undergoes modifications to meet modern challenges.”