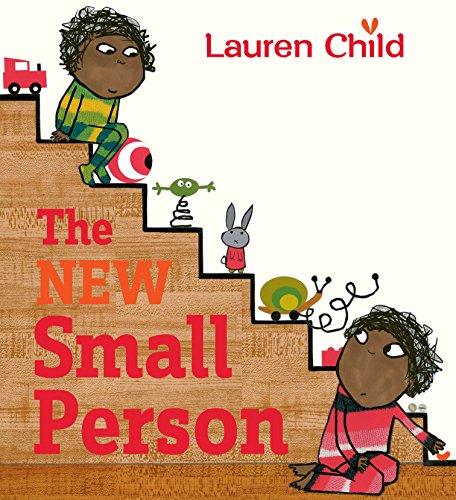 “Of Child's many gifts, perhaps the greatest is her ability to imbue her characters with unforgettable voices.”

Lauren Child, best known as the creator of Clarice Bean and Charlie and Lola, has had a terrifically successful career, winning many awards for her humorous stories and collage-style art.

In The New Small Person, we have a Same Old Story: the pampered only child must deal with being shoved off center stage by the arrival of a squawking sibling. Despite claims to the contrary on the jacket flap, it's not original. You've read this story many times before.

Only you don't care. You don't care because this version is enacted by Lauren Child’s characters, whom you adore. Of Child's many gifts, perhaps the greatest is her ability to imbue her characters with unforgettable voices. When she bestows it upon a New Person, big or small, the deal is sealed: you love him, plain and simple. Here, meet and love Elmore Green, reluctant big brother.

The narration is third person, but clearly a manifestation of Elmore’s personality. It explains why being an only is so superior: “No one moves your precious things ‘one inch,’" and how now he must endure the new small person sitting on "things that didn't want to be sat on." The interloper is referred to as "it" for most of the book, even when all “it” wants in life is to be just like its big brother.

Eventually, as you expect from the start, Elmore comes around. He recognizes his little brother’s value in his life and even goes so far as to call him by his actual name. And so he’s ready at last to share the spotlight, if not his orange jellybeans.

Child’s art increases the charm of Elmore’s voice. Creative use of font sizes and styles as well as swirling, twirling, and toppling lines of text create cadence and nuance; and appealing kid’s-eye views of the world make the already engaging illustrations even more so. These strategies are nothing new. It’s what Lauren Child does.

Don't be surprised if she continues to win New Big Awards.