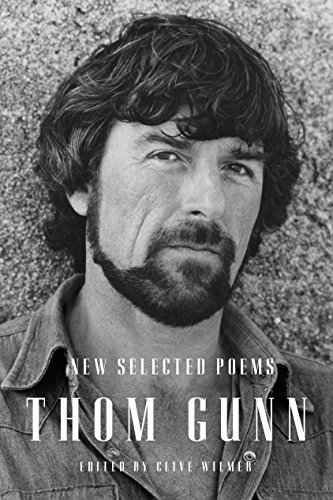 “this thoughtfully selected span of Gunn’s poetry is not only an immensely pleasurable read but also a master-class in poetic form.”

A new must-have for all LGBTQIA libraries everywhere! But it’s not meant to stay on the shelf, no. This new selection, edited by Thom Gunn’s friend Clive Wilmer, has been thoughtfully designed to be held and read, studied and enjoyed, page by page. It doesn’t pretend to be comprehensive or definitive; instead, it’s a splendid introduction to Gunn’s poetry, with a smart sampling of his work over the many years, which slowly brings the reader into Gunn’s large and restless world.

Whether you’re a devoted follower or new to Gunn’s work, this new selection has something valuable to offer. Wilmer’s biographical introduction provides just the right amount of historical context, drawn from personal as well as scholarly sources, along with some of Wilmer’s own close readings of specific poems.

For example, Wilmer uses Gunn’s own introduction to the works of Ben Jonson (a poet introduced to Gunn by his teacher, Yvor Winters) to illuminate “the process of understanding”—the taking poems “to heart . . . ultimately—acting upon them,” a process which is also key Gunn’s poetry (emphasis in original). The only part of the introduction that’s questionable is the paragraph toward the end in which Wilmer attempts to psychoanalyze the poet’s later years and his tragic death (“he must have felt at some level betrayed and abandoned” by his mother). Friends, of course, are allowed to speculate, but editors should know better. Otherwise, the 30-page introduction, along with the 78 pages of notes at the end, provide exactly the right level of helpful information and literary gloss for those who are curious.

Among the selection of 71 published works, the reader will also discover a previously uncollected poem, “From an Asian Tent,” composed in the 1960s. While this selection doesn’t include some poems like “Black Jackets” and “The Annihilation of Nothing,” taken all together this thoughtfully selected span of Gunn’s poetry is not only an immensely pleasurable read but also a master-class in poetic form. The rigor and lyricism of his lines shine brighter still, even as the editor’s notes increase the reader’s awareness of the historical realities and personal desires that informed the poetry.

Nowadays, some might put Gunn on the same reading list with Plath, Lowell, Sexton, and Berryman—although Gunn himself would object, as Wilmer states in his introduction.

Still, so much of today’s contemporary poetry—its robust authenticity as well as its odd hybridity of forms—can only be understood by studying these so-called confessional poets, along with other “extreme” poets, like Gunn.

As Wilmer reminds us, “Gunn was gay at a time when gay people tended not to be open about themselves.” Whether queer poets know it or not, Thom Gunn opened doors for all of us reading and writing today. Lucky for us, this new selection of poetry opens a door into his world—and what a world it is.