The New Science of Consciousness: Exploring the Complexity of Brain, Mind, and Self 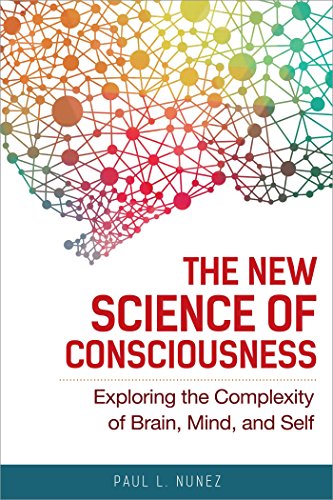 “if you are looking for a book that describes the brain’s role in how we create perspective(s) and interact in the world, including some aspects of mental health and mental illness, this book is a good start.”

What is consciousness? How is it that we are self-aware? “Do minds emerge from brains? Or is something more involved?” In his book, The New Science of Consciousness, brain research consultant and professor emeritus from Tulane University, Paul Nunez, does his best to answer these questions, specifically looking to science for what it can offer on both the “easy” and “hard” questions of consciousness. The book attempts to make the science of consciousness accessible and is a good choice for readers who are interested in the science that underlies consciousness studies.

One warning: Although the author goes to great lengths to make the book accessible to those who are not doctoral level scientists, and he makes a valiant go of it, the book is not always an easy read. Without a basic knowledge of university level physics, neuroscience, and the philosophy and theology of various writers on the psyche and soul, it is doubtful that a reader would fully grasp the concepts in the book. That said, this is not a textbook filled with citations or jargon, and the author makes every effort to use language and analogies that an educated, everyday person can understand. Those who are interested in consciousness studies will enjoy this book.

Does the soul or psyche arise from the brain or is there something else at play? Nunez correctly asserts early in the book that generally the neurological aspects of the brain have been addressed by scientists and the theoretical idea of soul or consciousness has been addressed by philosophers and theologians. Yet to look at consciousness in this way, from battling dualistic perspectives, does not allow anyone the fullest understanding of how consciousness is manifest in human beings.

We are not conscious beings solely as the result of neural connections or from an ineffable soul. Consciousness seems to emanate from something indescribable by scientific means—those on the philosophy side of consciousness studies might call this the soul or psychologists the mind—and yet there is no question that this soul or mind makes use of nested systems in the brain to make itself manifest. It is to the latter that Nunez pays the most attention.

Nunez is a scientist and as such, his book digs much deeper into the science of consciousness studies than the philosophy. For those with an interest in the science of consciousness, this book does a wonderful job of exploring and explaining the latest discoveries and ideas. For those with a more philosophical or theological bent, the book at times might be a little flat.

Nunez understands that there is more to consciousness studies than strict science and discusses this tension at length, working to heal the divide between science and philosophy in this field. “Even if consciousness emerges from brain complexity as believed by most scientists, the very existence of the phenomenon of self-awareness remains a deep mystery.” That deep mystery is expressed in other texts.

There are questions to which we do not have good answers. Are humans and higher animals in some way special because we have higher forms of consciousness than other species? How much relationship do other animals have to self and the past? Can there be consciousness without what we would call a soul, something that might not develop in artificial intelligence? How much free will do we really have? These are all questions explored in this book.

If you’re looking for answers to the deep questions of, “Why are we here?” “Does God exist?” or “Can we access higher universal truths by achieving higher levels of consciousness?” skip this book. There is little of philosophy here. But if you are looking for a book that describes the brain’s role in how we create perspective(s) and interact in the world, including some aspects of mental health and mental illness, this book is a good start.

For those with a basic understanding of biology, physics, and an interest in neuroscience or cognitive science, Paul Nunez’ The Science of Consciousness is a great place to begin to learn the latest findings in the scientific study of consciousness.

Constance Scharff, PhD, sits on the advisory board for Rock to Recovery, an evidence-based music program providing services to addiction treatment centers. She is an internationally recognized author and speaker with expertise in mental healthcare, addiction recovery, and personal transformation.