The New Religious Intolerance: Overcoming the Politics of Fear in an Anxious Age 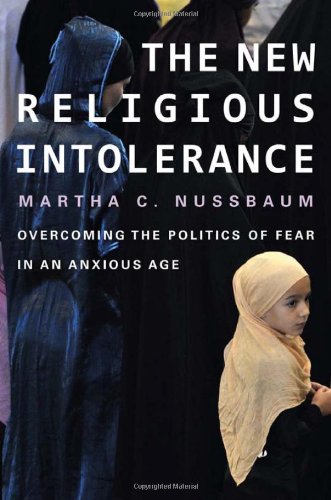 “Those who know little about these subjects but who have always been wondering what the whole fuss is about (regarding the burqa, the veil, or Park51) will find good explanations in this book and much material to consider.”

How far can or should one go in terms of accommodating religious difference in liberal secular democratic societies? This is the question that Martha Nussbaum’s latest book The New Religious Intolerance sets out to answer.

The question is not new, and there is already a remarkable scholarship on the subject in the domain of political theory and political sociology. Suffice here to highlight the work of Will Kymlicka and Charles Taylor (on Canada), Bhikhu Parekh (on Britain), Patrick Weil (on France) and Brian Barry (on both the United States and Europe).

Since 9/11, and against the background of mounting Islamophobia, the question has nevertheless gained in salience. Among other things, this is shown by the debate concerning Park51, the construction project for an Islamic community center in the vicinity of Ground Zero in Lower Manhattan, to which Martha Nussbaum devotes a full chapter.

In Europe, there is instead a dispute over the ban of the burqa in France, Belgium, and Italy against the background of the inexhaustible and ever-recurring debate on the Islamic veil.

These actual debates are Martha Nussbaum’s starting point for revisiting the issue of the role of religion in public life. Her objective is to make a case for tolerance and for a compassionate yet pragmatic form of accommodation politics in line with democratic principles.

To do this she reverts to ancient Greek philosophy to argue in favor of impartiality; examines the early beginnings of the Anglo-American legal tradition to show that the neutrality of law does not always suffice to ensure either “equal respect for conscience” or “ample liberty;” and calls upon literature to explicate the significance of a “sympathetic imagination” towards civility as the basis of civic life.

In brief, Martha Nussbaum’s argument is that it is both possible and desirable for modern advanced democratic societies to accommodate for (minority) religious demands. Doing so asserts rather than undermines liberal democratic principles; and it cultivates tolerance and mutual understanding.

This said, actual and past experience teaches us that ultimately there is never a clear-cut answer to problems that emerge out of the confrontation of beliefs, even when the principles proposed by Martha Nussbaum are adhered to. This is because questions of conscience are often embellished into politics of recognition.

It may, for instance, be evident at first sight that democratic societies that value religious freedom must entitle minorities to establish own places of worship. But sometimes, as in the case of Park51, the choice of location will be viewed as offensive, and this will necessitate some form of a dialogue in order to arrive at a compromise or, simply, in order to raise awareness.

As for the case of the burqa, the real difficulty there is that it is contested within Muslim communities themselves. Furthermore, it demonstrates that insofar as religious practice is concerned, a key criterion should always be whether communities claiming ties of belonging in the name of religious belief are themselves respectful of individual autonomy.

The arguments advanced by The New Religious Intolerance will not be new to those with prior knowledge in the field of multiculturalism. They nevertheless still stand to benefit from Martha Nussbaum’s treatment of the subject and her combined use of legal theory, Greek philosophy and literary analysis. Those who know little about these subjects but who have always been wondering what the whole fuss is about (regarding the burqa, the veil or Park51) will find good explanations in this book and much material to consider.