The New Negro: The Life of Alain Locke 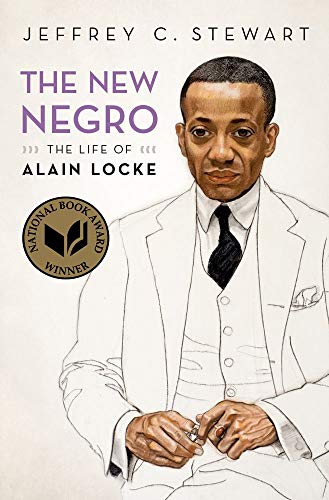 The New Negro: The Life of Alain Locke is Jeffrey C. Stewart’s biography of one of the most influential scholars of the early 20th century. Professor Alain Locke is remembered most as a principal architect of the Harlem Renaissance and gay black mentor to African American artists including Langston Hughes, Countee Cullen, and Zora Neale Hurston.

But that was just part of his oeuvre as writer, commentator, curator, philosopher and professor throughout his life. Locke’s groundbreaking 1925 book The New Negro: An Interpretation, framed a new dialogue of black arts culture. Locke’s thesis was continually challenged but his theories and influence spanned decades.

Stewart’s biography examines every detail of Dr. Locke’s extraordinary life and is, at near 900 pages, a masterpiece of sustained craft, research, and historical scope. Stewart is professor of Black Studies at the University of California, Santa Barbara; he is also author of Paul Robeson: Artist and Citizen.

Alain Locke grew up in Philadelphia’s black “Victorian” gentry of fin de siècle 19th century and was recognized as a gifted student at the Philadelphia’s progressive Central High School and Philadelphia School of Pedagogy.

In 1907, Locke graduated from Harvard University with degrees in English and philosophy and became the first African American Rhodes scholar at Oxford.

In fact, Locke’s father was the first African American to work at the U.S. Post Office. His mother, Mary Locke was a veteran black Philadelphia educator herself and continued to influence and guide her son’s academic career. Their bond remained a dominant relationship in his life until her death when he was 37. They shared a house together, and he took care of her in her declining years. His mother accepted him as gay, even if it was not openly discussed. The mores of black Victorian lifestyle of the era is not only brilliantly condensed social history by Stewart, it is vital in understanding the conflicted impulses that Locke both embraced and came to finally shed as a self-liberating gay black man.

Similarly, Stewart accomplishes a fascinating analysis of the elaborate vaulted gay subculture at Harvard and even more pronounced at Oxford. At Harvard, Locke sought to impress the white Harvard dons, but was overtly alienating the small cadre of other black students at Harvard, who went to lengths to include him in their regular social activities. He looked down on their shared bond as ostracized black men and rebuffed their efforts to get him to college mixers, for instance, to meet girls. Locke’s aloofness was in part self-protection so as not to be outed, meanwhile he was secretly pursuing white Harvard men sexually, often under the pretext of intellectual and artistic camaraderie.

Locke was, throughout his life, full of contradictions and dualities. He manipulated people and situations to protect his own interests, but just as often, strove to do the right thing amid his growing sense of responsibility to the African American diaspora. Eventually he grew frustrated with systemic hypocrisies and power plays of the citadels of academia and started to build a singular career as a cultural theorist and intellectual firebrand.

He studied in Berlin and became part of the avant-garde in Europe and was shuttling back and forth to New York. By the early 20s, he emerged as a seminal figure in the Harlem Renaissance. But owing to looming shared debt he racked up traveling Europe and Africa, his mother convinced him to remain in education and he reluctantly accepted a professorship at Howard University in the 20s.

As accomplished as Locke was as lecturer and cultural black activist, he also was subjected to institutional and black community backlash for being homosexual. He viewed himself as the ultimate outsider. His yearly jaunts to escape both racism and homophobia in the U.S. took him to Germany, Vienna, Ethiopia, France, Greece, Egypt, and Haiti. He knocked down one barrier after another internationally, brokering the cultural exchange of African art and sculpture to be exhibited in the U.S.

In New York, Locke was guest editor of the influential black radical magazine the Survey Graphic, which he completely transformed. And he built on its success with the publication of The New Negro a compendium of visual art of black writers, art, essayists, theorists, poets, and theater folk that were defining the cultural landscape of black America.

He both collected and arranged exhibits of African art and became a leading authority in the U.S. He tolerated working with Alfred Barnes, for instance, to gain access to Barnes’ collection of tribal art work from West Africa, even as he let it be known that collectors like Barnes were essentially pillaging the art for their own financial gain.

Locke openly challenged such legendary African American iconic leaders as W. E. B. Du Bois with his own theories about confronting racism and using black art as powerful weapon in achieving racial equality.

Locke was author not only of the first black studies program at Howard University in the 30s, he published a series of Bronze books, that focused on various issues of African American culture, history, and social justice issues that spoke to all Black America.

He was an early advocate of African American artistic perspective, a champion for such artists as Jacob Lawrence and Norman Lewis, making strong cultural statements documenting black life in American but whose work was otherwise being ignored by the art establishment.

Stewart writes sensitively and candidly about Locke’s many affairs. With the death of his mother in 1922, Locke carried on professionally, but privately was feeling the loss in profound ways. Privately he was surrounding himself with young gay black men in the arts, free from the strictures and politics of the Washington/New York/Philadelphia/Boston black academic bourgeoisie. He fostered relationships, romantic and otherwise, with young writers Langston Hughes, Countee Cullen, artists Bruce Nugent and Charles Sebree, and even when the affairs collapsed, he still maintained their friendships.

Meanwhile, Locke was teaching less and becoming even more involved with the new generation of black writers, musicians, and artists in Harlem post-Renaissance including Hughes, Cullen and Claude McKay. He also collaborated with emerging female writers in New York including Zora Neale Hurston and Jesse Faucet, helping them get published, although he was at various times accused of misogynistic biases against their writing.

Locke cultivated private funds and support from White arts philanthropists and institutions. The most complex (and bizarre) was his protracted relationship with Charlotte Mason, whose patronage came with strings attached, however invisible at first. Locke played and was played by Mason in the ups and downs of their friendship. She also commissioned Hurston and Cullen, who also came to view her as a racist overseer who wanted to control them personally and professionally.

Locke had battles on other fronts, though when he was dismissed from Howard for the trumped-up charge of spending too much time on his non-Howard professional commitments he hired lawyers and fought back. He took on the last white president Stanley Durkee, who was summarily fired and replaced by Mordecai Johnson, who reinstated Locke.

Stewart writes: “It was not the case that Locke was unaware of the sociological, economic and political dynamics that produced and sustained the African American ghetto . . .” After the Harlem riots of 1935, Locke changed his view. Ironically the riots in Harlem were taking place just as Locke was opening his exhibit of African Art in the privileged white world of MOMA.

As respected as Locke was by his colleagues at Howard and by New York literati, Locke was being left out of the black artistic vanguard that emerged during the 30s in New York and at Howard, even when he was reinstated, he was left out of the inner circle of more progressive young black scholars, led by political scientist Ralph Bunche and law professor Charles Hamilton Houston.

Despite setbacks, Locke continued to work and navigate the sociopolitical landscape of the era, even giving critiques of vanguard fellow black writers like Richard Wright, whose incendiary realism in his 1940 novel Native Son was a bestseller. Locke had his defenders, even among former rivals, but always had detractors among the younger factions within academia and within the burgeoning civil rights movement after on the eve of WWII.

By the late 30s, Locke’s gay life may have had a veil of invisibility but it was widely acknowledged and used against him at times. He became more cautious, specifically after he was called in for questioning by Sen. Joseph McCarthy’s henchmen at HUAC when he dodged their question “Have you now or have you ever been a member of the Communist Party.” By then, Locke also suspected that the government knew he was homosexual, a fact that could have landed him in jail at any time, so he was spending more time in New York where he could be more discreet.

Even as an older gay man he stayed involved with a series of younger men who he suspected only had sex with him so he could help them with their careers or with money. He was lonely and disheartened that he would never find love in America. He also couldn’t travel to a freer life in Europe as WWII was imminent—not to mention the threats posed directly at homosexuals by the Nazi regime.

Even with a series of professional setbacks, the least of which was the prevailing opinion among a new generation of black scholars that the so-called Harlem Renaissance had failed in its lofty cultural mission. But by then Locke was already reframing the dialogue into a broader context. He brokered the historic 1940 American Negro Exposition in Chicago. And he was the central figure of a slate of publishing initiatives with the American Association for Adult Education (AAAE) and the American Library Association, and secured his position as a leading voice in African American academia, sociopolitical discourse, and as an authority on black allied arts in America.

He realized that his reach for a cultural revolution through art had its limits and was even irrelevant in the face of black Americans living under a racist government, in abject poverty as America entered WWII and black men were while fighting for a free Europe at the same time their families were being denied basic dignity and freedoms back home.

Stewart doesn’t canonize Locke even as he painstakingly examines every aspect of his achievements, Locke’s self-serving impulses, jealousies and manipulations, personally and professionally are just as much a part of this compelling man.

A minor criticism of the book relates to Stewart’s penchant for exhaustive backstories with too many factoids, specifically concerning individual projects. His thoroughness gets a bit heavy going, but that is such a minor complaint in the context of Stewart’s altogether towering achievement of the biographer’s craft in this bio-history of a complex man in turbulent times.