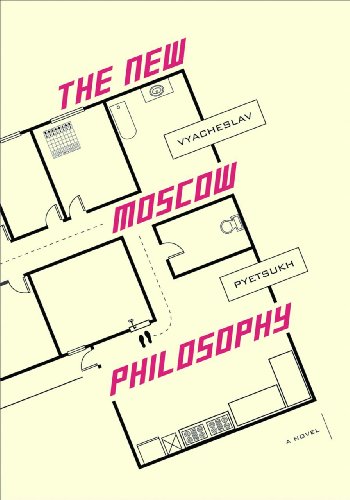 “. . . an important historical work of fiction. Like the works of Solzhenitsyn, The New Moscow Philosophy exposes the commonplace as evidence of the sickness of the society in which it exists. . . . a fine example of all that is good in the best of Russian literature.”

First published in 1989, The New Moscow Philosophy was quickly translated into French, German, and Spanish. It proved a hit, and firmly established Vyacheslav Pyetsukh’s credentials as yet another essential Russian author.

In this first English translation we, too, get to experience the sharp characterization and typical Russian wit that the Europeans have been able to enjoy for over 20 years.

The New Moscow Philosophy takes place in a communal apartment in late Soviet-era Moscow. The apartment has been in the family of Alexandra Sergeyevna for years. More recently though, she has occupied but one small room, while the remainder has slowly filled with an assortment of different tenants. When Alexandra one day disappears from the apartment—having first been frightened by what appeared to be a ghost—the remaining tenants enter into protracted negotiations over who should be allowed her room, and what has happened to her anyway.

What follows has all the ingredients of the classic Russian novel. In fact The New Moscow Philosophy is a very clear and freely acknowledged parody of Dostoyevsky’s Crime and Punishment. But perhaps parody is the wrong word. A parody usually exists to poke fun at the original, and this is very much not the case in The New Moscow Philosophy. In fact the author regularly refers with admiration to Dostoyevsky’s famous work; so let’s call it an homage. Mr. Pyetsukh’s novel uses Crime and Punishment as the heroic sunlit backdrop for his deliberately watered-down version. In this way he is drawing attention to the state of Soviet-era Russia and the slow dissolution of its once ferocious ideology.

The author, Vyacheslav Pyetsukh, spent many years teaching high-school history before becoming a victim of Soviet officialdom. In 1982 he came to the attention of the powers that be over the publication of several of his works, and was forced to resign. Despite never having considered a career as a professional writer, he soon published his first novel and has since won a number of prestigious awards, including the Pushkin Prize. He and his wife continue to live in a small village outside of Moscow.

While the Russians have a long and proud history of subversive literature, this is an atypical example. The story is relatively straightforward, the characters regular folk. But make no mistake, this book takes the commonplace and turns it to the service of the dissident. The absurdity of life in Russia at a time when Soviet control was in its death throes, and Glasnost was on its way, is laid bare. As such this is an important historical work of fiction. Like the works of Solzhenitsyn, The New Moscow Philosophy exposes the commonplace as evidence of the sickness of the society in which it exists.

What’s more, The New Moscow Philosophy is a great read in its own right. The writing is clear and clean, the characters are well realized, there is a lucid linear plot, and the story resolves appropriately. Yet there is more. Like all of the best Russian novels, you are compelled to keep on reading. You want to know what will happen next, even if what happens next isn’t really all that exciting in and of itself. It’s like being a fly on the wall, a social voyeur: You want to see how these people live. You want to know more. . . .

Also, like many of the greats, author Pyetsukh includes extended passages of philosophical discussion, thinly disguised as fiction. His characters discuss the nature of good and evil, and the narrator—Mr. Pyetsukh himself, one suspects—discourses on the historical relationship between literature and the Russian collective social consciousness. These detours are both a fascinating insight into the developing mood of the times and a direct indicator of the tenor of the novel itself.

There is a huge amount to like about The New Moscow Philosophy. It is a fine example of all that is good in the best of Russian literature. It is, on the surface, a nice simple mystery story. Yet not far beneath lurks the subversive, questioning, dissatisfied social commentary that characterizes much of Russia’s literary heritage.