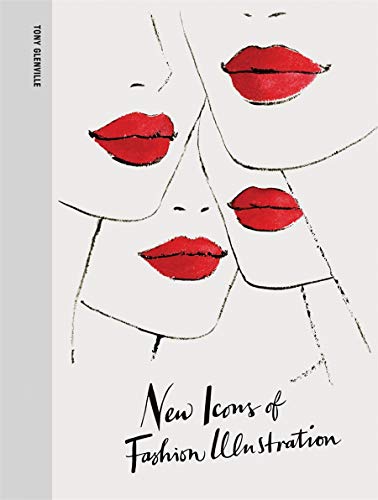 A delightful book that deals with an aspect of fashion that will far outlive the clothes and the designer: fashion illustration. In a time of computer generated images and photoshopped this and that there are still those who literally create as the great artists of our ages once did: by hand.

New Icons of Fashion Illustration exposes the reader to a new generation of those artists who might have at one time been considered the only true “artists” representing fashion. Boomers might recall that fashion illustration was once the primary method of advertising in magazines and newspapers.

Mr. Glenville offers a large cast of players who make up the roster of internationally recognized fashion illustrators. The 28 featured members of this elite community share one thing: copious amounts of artistic talent.

The end result may vary depending on the source and form of conception, but each artist possesses a characteristic technique. The illustrator of the 21st century seems to be not as photographically or literally inclined as those who came before such as Kenneth Paul Block, George Stravinos, or Antonio Lopez.

What the reader can glean from this assortment is that today’s fashion illustrator possesses various talents rather than only one specific style to set them apart from their predecessors of bygone days.

Years ago, illustrators were firmly and immediately recognizable by their signature technique; today’s roster is far more multifaceted in differentiable output. Today there are few artists who revel in a singular and recognizable style of imagery, i.e. Richard Haines whose work has instant recognition to those who are “illustration savvy.”

If you love art, if you love fashion with all its various and contiguous aspects and have an unquenchable thirst for all aspects of fashion, then New Icons of Fashion Illustration is highly recommended. The reproduction quality is superb. Mr. Glenville provides just enough background on each artist with his insights and then expands your knowledge via a small body of their work as well as a set of interview questions.

Just when you think you know everything there might be to know about a subject, someone take the time to prove to you how wrong you are!