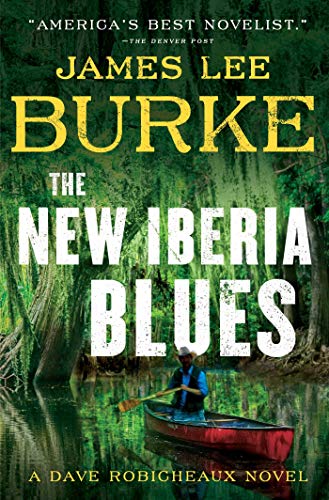 “Burke is an old hand at this game, and he juggles deeply flawed characters, several subplots, and dark humor with the vivid prose that draws comparisons to William Faulkner.”

The 22nd in Burke’s Dave Robicheaux series shows that Burke, now in his eighties, has lost nothing. His latest exploration of good and evil offers a cast of southern grotesque characters worthy of Flannery O’Connor.

Desmond Cormier, who left town years ago, returns as an award-winning director to shoot a film on his home turf. The filming barely begins before Detective Robicheaux finds the body of a young woman on Cormier’s property. Cormier and his friend Antoine Butterworth deny knowing anything, but Robicheaux is skeptical. Before long, other bodies turn up, all posed as various Tarot cards. The victims have little in common except that several wear a similar medallion.

Robicheaux’s long-time partner Clete Purcell saw Hugo Tillinger, an escapee from a Texas prison, in the area before the first murder, but didn’t report his sighting. Tillinger, accused of burning his wife and daughter, insists he is innocent of all crimes but won’t turn himself in. Even though he seems to have no connection to the victims, he’s Robicheaux’s prime suspect.

At the same time, psychotic Chester “Smiley” Wimple appears in the area and kills sadistic cop Axel Deveraux. When Deveraux’s body is found posed as another Tarot card, Robicheaux has to suspect Wimple, too.

Robicheaux’s daughter Alafair signs on to help write Cormier’s screenplay and takes up with producer Lou Wexler, a relationship Robicheaux frowns on because Wexler is much older.

Robicheaux, an alcoholic who attends meetings and still craves a drink constantly, is a three-time widower. His new detective partner, Bailey Ribbons, is young enough to be his granddaughter and as seductive as a bottle of bourbon. Robicheaux knows there’s no fool like an old fool and Alafair, Clete Purcell, and Sheriff Helen Soileau remind him of the same fact—even as they vaguely encourage him to pursue the relationship.

While Robicheaux, Purcell and Bailey all know violence intimately and have enough skeletons in their pasts to fill a warehouse (Cormier’s film triggers flashbacks to Robicheaux’s Vietnam nightmares), they’re the characters you’d want on your side when things go south.

As the bodies pile up, Purcell and Robicheaux see connections between the dead victims and themselves, and the question becomes one of motive. Who is the real target, and why? When they discover that Cormier’s film may have funding from the New Jersey mafia and that Butterworth has an ugly past as a mercenary, they have a wealth of leads but no clear path.

Cormier sees Bailey as a modern Clementine from the classic film with Henry Fonda and Ward Bond, and he wants her for his own project. Bailey is torn between her job and the possible film with the charming but damaged Cormier, just as Alafair feels herself being pulled apart by her love of her father and her attraction to the Hollywood lifestyle.

Burke is an old hand at this game, and he juggles deeply flawed characters, several subplots, and dark humor with the vivid prose that draws comparisons to William Faulkner. It’s an apt comparison, and Burke’s oeuvre is even longer than Faulkner’s.

Most of the story is in Robicheaux’s point of view, but Burke occasionally slips into Clete Purcell’s mind for deeper explorations of the underside of town. He even goes into the mind of the psychotic hitman “Smiley” Wimple for scenes that blur the lines between Faulknerian stream of consciousness and magic realism. None of it feels out of place, and everything propels the complex plots to a jarring collision at the end. It’s a long strange trip, but worth every second.

Nobody else can tell a story like James Lee Burke. Fortunately, most writers know better than to try.