The New Feminist Agenda: Defining the Next Revolution for Women, Work, and Family 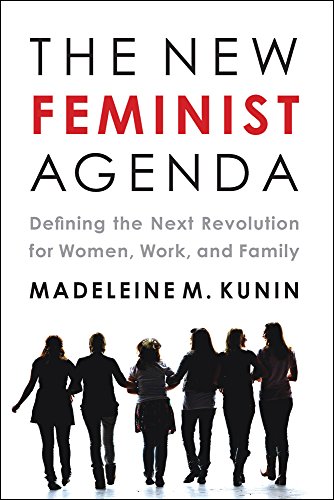 “. . . offers the makings of a roadmap for a journey we will all be better off for taking.”

When Madeleine Kunin was researching and writing her book, The New Feminist Agenda, she probably couldn’t quite imagine the full extent to which women would be singled out for punitive, restrictive legislative aimed at rolling back progress Second Wave feminists had achieved. If she had, perhaps there might have been a chapter about how reproductive rights figure into the relationship between women, work, and family.

That omission is perhaps regrettable now, but to be fair, her focus was clearly family/work issues, and Ms. Kunin has done a fine job of laying out those issues. While feminist readers who keep abreast of developments affecting women’s work lives and family demands may find that there is not much new in the issues she raises, she presents those issues clearly, using compelling data and examples to make her case.

For example, it is shocking to read that in 2010, women represented only 17 percent of Congress, putting the U.S. in 69th place in the percentage of women parliamentarians out of 178 countries. Female corporate board membership was also stuck at 17 percent. And among hot new companies like Facebook, Twitter, and Paypal none has a female director on its board.

Ms. Kunin, who calls for a revolution led by both women and men, seeks a broad based conversation in the interest of greater equality and opportunity. “We must link arms,” she says, “with both friends and strangers as we march in step to create a society in which parents can merge their work and family lives without shortchanging the children, the elderly, or the economy.”

In order to achieve this lofty goal, Ms. Kunin calls for building coalitions among labor organizations, women of all economic strata, the elderly and disabled, men, conservatives, liberals, religious communities, gay and straight people—in other words, she wants to see cooperative dialogue and action coming from every sector of society.

That’s a tall order in an age of political divisiveness and animosity and the reality is that collaboration is not easy even in the best of times. But Ms. Kunin is an optimist who believes a fact-based, moral roadmap can be drawn.

Using her experience as a successful state governor and a diplomat she offers suggestions for moving toward a win-win scenario. It’s a perspective that takes into account the Tea Party, the Arab Spring, and the Occupy Wall Street movement as well as the vast potential of social media.

Calling for the end of patience, silence, and politeness, she advocates “snatch[ing] back the words ‘family values’ and redefining them as the work/family policies necessary to sustain strong families.” The word “revolution,” she says, “is once again appropriate.”

Ms. Kunin raises a great many questions—irritatingly so at times—as she explores ways to improve the work/family dynamic. Often she answers those questions by way of anecdote and example. She is at her best when she asks in one chapter “What Can We Learn from the Rest of the World?” Looking at Norway, France, Germany and The Netherlands, she presents lessons learned, including the need to understand that “the needs of families in the workplace are no longer ‘women’s’ issues.”

Other inspirational achievements in those countries include labor union support, female leadership in government, active grassroots constituencies, business community support, and “a culture of social solidarity that rejects wide disparities between rich and poor.”

This book is both descriptive and prescriptive. It takes a practical as well as an ethical approach to sorely needed social change. Ms. Kunin offers a vision of a viable culture reshaped to recognize that women, men and all sectors of society, working together toward a common good, can effect saner, happier, more productive and secure lives. In doing so, she offers the makings of a roadmap for a journey we will all be better off for taking. That’s enough to make anyone an optimist.