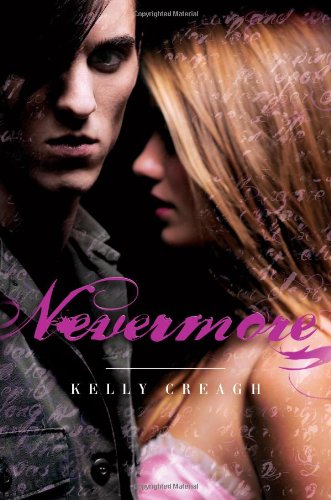 Edgar Allen Poe, high-school cheerleading, and true love—not three subjects you might think would naturally work together to create a richly crafted love story. Especially not a tale of two teens fighting against not only the world we live in but one beyond.

And yet it works and beautifully so. Kelly Creagh has created a magically engrossing novel in her debut work Nevermore. Knocking down the barriers of social stereotypes and crossing lines long drawn, Creagh has presented a story unique in its combination of classical literature and the modern young adult novel. The author shows an amazing scope of knowledge of the great poet himself and high-school life—with added splashes of the paranormal.

When assigned to partner with the high school’s infamous “King of the Goths” in her English class, the popular Isobel Lanley is horrified as her journey into another world begins. As the top flyer on the cheerleading team, Isobel is usually immersed in her star football-playing boyfriend, Brad, plus “the crew;” but now she finds herself mysteriously drawn to Varen Nethers with his dark looks and jade eyes.

Soon her life begins to fall to pieces around her as another world appears in her dreams. Edgar Allen Poe, once just the remote subject of an English project, now takes on a new light, as visions and a mysterious figure named Reynolds appear to warn of dangers ahead. Is this all in her imagination?

As Isobel fights to keep control of her life, she is also losing her heart to Varen—himself a swirl of secrets and mystery. Whoever said that opposites attract might have been right, but in the end it’s the person that matters, and Isobel and Varen find themselves clinging to each other as other forces try to force them apart.

Nevermore is a book that keeps the reader guessing until the very end. It also opens the door for more from Creagh. With characters such as Isobel and Varen, so vividly imagined and realistically crafted, the next book is highly anticipated.

Always one step ahead of the reader, Nevermore is a book to engage in, speculate over, and savor.