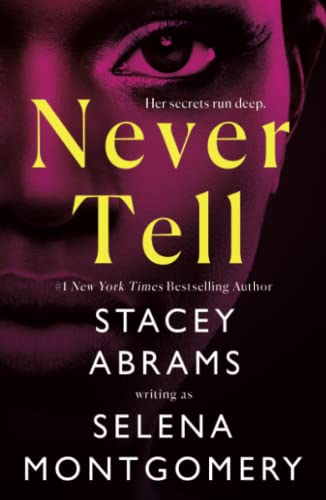 “Abrams maintains a good flow with strong characters the reader will identify with.”

Stacy Abrams’ (aka Selena Montgomery) latest book, Never Tell, takes the reader on an exciting journey with her psychological thriller when protagonist Dr. Erin Abbott comes face-to-face with devils from her not-so-distant past.

Abrams’ story is a cross between mystery thriller and hard romance—a combination it might seem to the reader as one hard to read, but Abrams does an admirable job of combining the two genres. There are times when it seems that the romance side of the story is dipped too far into overkill, but for the romance reader, this will be just what they’re looking for in fiction.

The story opens at the scene of a crime where Analise, an abused and badly beaten young woman, finds herself in a rural cabin outside of San Francisco where she has just killed her abuser, Dr. Nathan Rhodes. With the help of her longtime friend, Sebastian, they dispose of the body, and he transforms her into a new person.

Move forward two years and Analise has become Dr. Erin Abbot, a criminal psychologist teaching at a small college in New Orleans. When a friend who lives in the same apartment building where Erin does is viciously murdered, it does not take long before the good doctor becomes involved with a serial killer—one who has Erin in his or her crosshairs. It seems the murderer knows precisely who she really is and is playing a dangerous game with her.

Erin has struggled for two years to bury her true identity and escape her past but when she accidentally—and literally—stumbles into Gabriel Moss, brother to one of her coworkers, he becomes smitten, and no efforts on her part will keep him at arm’s length.

More murders occur and the killer sweeps Erin deeper and deeper into the crimes—as if this is a game and Erin is tagged it. Erin is unable to convince the police about a serial killer on the loose in New Orleans and at the same time untangle herself from Gabriel who knows she keeps secrets and is determined to uncover them.

As the murders pile up and Erin sees an alphabetical pattern begin to form, she begins to fear an entire alphabet soup of murders and realizes that she is the final character in the stream of victims.

About three-quarters of the way through the book as the reader is checking out the clues that Abrams drops and Abbott uncovers, the hammer comes down on one character whom Abbott determines is the killer. Tthis is unusual since most mysteries wait until the final climactic scene before the real culprit is exposed. The savvy reader will say, “No, this can’t be right” and will go back through all of the possible perpetrators to see who else might be the real killer.

And that is the right thing to do, although to her credit, Abrams pulls a real winner out of the clouds. Once uncovered, the reader will not be expecting the real killer to be the who they are.

Abrams maintains a good flow with strong characters the reader will identify with; she ties up all of the loose ends very neatly and to the reader’s satisfaction.