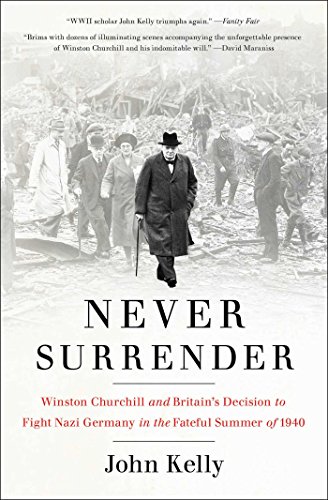 “narrative history at its literary best.”

John Kelly’s brilliant retelling of the first year of World War II is a stark reminder of the critical importance of whom we select to lead us. The hero of his tale, of course, is Winston Churchill. Churchill’s mighty oratory combined with the stoic and forthright commitment of the British people proved decisive and likely protected Western Civilization against the worst tyranny of the modern era.

John Kelly’s work focuses on the critical political decision the British War Cabinet needed to make. Should it seek an honorable settlement with the Nazis or fight on to the ultimate outcome, the likely subjugation of the British Isles? It seemed that only Churchill could foresee a British triumph in the war.

Kelly’s research is thorough and well annotated. His work is narrative history at its literary best. Kelly presents an informed and accessible analysis of the events as they occurred day-by-day, hour-by-hour. Churchill is not portrayed as a super-human or a divine force, but rather as a statesman on whose sloped shoulders the survival of his nation depended.

In hindsight we can recognize his political genius. There were Conservative leaders—Halifax and Chamberlain—who feared the strength of the enemy and sought to convince both the Churchillians and the Nazis that a negotiated resolution was not only viable, but inevitable. The Germans did not seem willing to accept anything but a total surrender, and Churchill would countenance only a total military victory over the forces of evil.

By first examining the sustained effort of the British throughout the 1930s to appease Mr. Hitler, Kelly reminds the reader of the fundamental importance the Great War tragedy played in the lead up to August 1939, when the Germans invaded Poland.  All the combatants in the First War had suffered greatly. Their losses in men were astounding, only to be exceeded by the toll of the Second World War.  Hitler pursued revenge, while the British and French sought only temporary arrangements that they confused with “peace in our time.”

While Hitler created a great army and air force, the British and the French avoided rearming, relying on concessions and feeble diplomacy. Only when Hitler attacked on the western front did the Allies appreciate the complete failure of their unwise efforts.  Prime Minister Chamberlain was shocked by the German aggression. He had trusted Hitler. After a period of political jockeying, he gave way to Churchill and the foreseeable query whether Great Britain should fight or fold. On that question Churchill was unshakeable. The United Kingdom would “never surrender.”

The French come out second rate in Kelly’s story as they did on the battlefield. Their effete leaders paled in comparison to Churchill. While their troops fought bravely, they were not well led. Ultimately, the French surrendered to the reality of the Nazi war machine as it approached Paris.

Americans may not fully appreciate how close the British were to surrender. Had not hundreds of thousands of British troops survived at Dunkirk to fight again, the British would have been left defenseless. The British RAF protected the home island against the Luftwaffe’s onslaught, but only barely. Hitler decided not to invade Britain and instead turned his attention to the Soviets. He likely would have won the Battle of Britain and the invasion of the Home Islands had he made a full commitment to that struggle. The British were fortunate and so too were we all.