Never Sit If You Can Dance: Lessons from My Mother 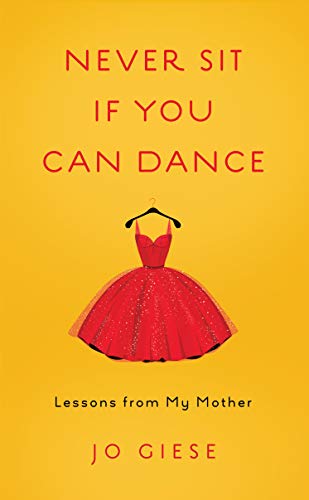 “The reader will leave this charming book with the sound of Babe’s raucous laughter in mind . . . Babe Giese was a character, and one anyone should be pleased to get to know.”

Gladys “Babe” Giese wouldn’t have appreciated being called a dame. She was a lady, thank you very much, albeit one who liked to dance, drink, and have a good time, right up until her death at age 98. She also liked to give advice, both in words and in the way she lived her life.

In Never Sit When You Can Dance: Lessons from My Mother, award winning journalist Jo Giese shares with the rest of the world some of those lessons learned from her strong, bright, loving mother. In the grand tradition of mothers and daughters everywhere, Giese and her mother did not always see eye to eye in Giese’s youth and young adulthood. Babe’s devotion to her husband and family seemed dated and sycophantic in the eyes of young Jo, a woman who came of age in the era of Gloria Steinem and the feminist revolution; however, as Giese aged she came to understand that far from being anyone’s lesser half, Babe lived her life in a way that both pleased herself and made life pleasant for those around her.

This memoir is shaped by Geise’s gradual recognition that her mother’s life lessons had shaped her own life. Her memories of the great joy shared by her parents in their love of entertaining led Giese herself to dance as a form of healing after a nasty divorce. Babe’s insistence on making guests feel welcome from the moment they entered her home to the moment they drove away was reflected in Geise’s hospitality to guests as she grew older. Even Babe’s insistence on rich, bold colors came to shape Geise’s own wardrobe. Babe encouraged her daughter to see the world and she did, both personally and as part of a career in journalism.

There are valuable lessons in this book from Babe about kindness and humility, about caring and loyalty, for any reader to absorb from this warm story of a woman who lived her life to the fullest.

Giese tells her mother’s stories with a gentle touch, emphasizing Babe’s humor and practicality and sliding over tougher times in Babe’s life, such as her five miscarriages and the death of her husband. This is perhaps the only weakness of this book. The reader is privy to Babe’s tough position that “no one wants to be around someone who is depressed,” and Jo Giese talks in vague terms about a black period in her mother’s life, but without the context of the shape of Babe’s sorrow that particular lesson could be read as harsh, particularly by someone who suffers from depression.

Still, this is a minor weak spot in an otherwise lovely book. Babe’s lessons about how to live a life rather than merely exist for a number of years are timely. The reminder of the importance of courtesy in an age of discourtesy is refreshing, as is Babe’s insistence on remaining fully herself despite the twists thrown at her by a long and eventful life. The reader will leave this charming book with the sound of Babe’s raucous laughter in mind, and that’s just as it should be. Babe Giese was a character, and one anyone should be pleased to get to know.