Never Say Die: The Myth and Marketing of the New Old Age 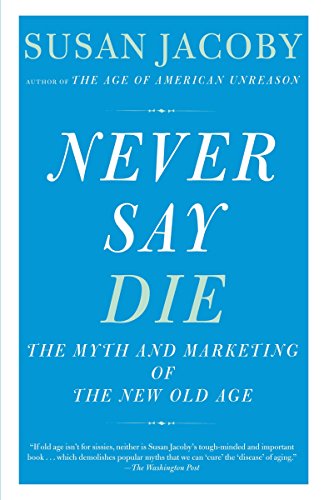 In Never Say Die, author Susan Jacoby recalls waiting at a New York City bus stop one frigid December day “when an old woman, who appeared to be in her eighties and was hunched over and crippled by osteoporosis, wheeled her chair onto the bus lift and told the driver, ‘Let me off at the stop closest to Bloomingdale’s.’ ” A 50-something woman, also waiting at the stop, loudly whispered, “I’d rather be dead than live like that.”

Jacoby clearly disdains that woman’s comment. Yet, judging by this book, it’s amazing that anyone over age 80 doesn’t just end it all.

As described by Jacoby, life in the ninth decade and beyond is a miserable span in which we outlive everyone we care about, especially if we’re female; our savings run out; our bodies degenerate from osteoporosis, cancer, heart attacks, diabetes, arthritis, and other incurable conditions; we gain no particular serenity or wisdom; and half of us develop Alzheimer’s disease. Even a 14th century peasant afflicted with the Black Death died more comfortably than today’s average senior citizen.

Yes, Never Say Die really is that angry and pessimistic. Jacoby, who is 65, admits that “I intend to be an angry old woman.” The question is: What is she so angry about? The answer isn’t clear.

Certainly, Jacoby raises some valid points in seeking to throw cold water on the prevailing, overly optimistic view of aging—what she calls “emotional correctness.” (As she points out, even the word “old” is taboo, “seen as an expression of prejudice rather than a factual description of a stage of life.”) The older people found in advice books, commercials, and magazine and newspaper articles (including many that Jacoby confesses to writing about during her career) are a collection of spunky heart-attack survivors who beat the odds, skydiving nonagenarians, gray-haired but wrinkle-free couples, and the still-cute ex-Gidget, Sally Field, talking about osteoporosis. Alzheimer’s is merely a smiling Grandpa who is not quite “himself.” The standard retirement-planning article (and this author must confess to having written her fair share) inevitably tells readers that if they just forgo one cappuccino each day, they could save millions of dollars.

So Jacoby is correct that we need to be realistic about what it’s like to be old. Few people over age of 85 can climb a flight of stairs unassisted, let alone sky-dive. Only half of all American job-holders have any retirement plan from their employers. There is no cure for Alzheimer’s disease, and the descent into darkness is not filled with smiling grandkids. Plus, Jacoby raises some important warnings about anti-aging quackery, such as miracle promises for the substance resveratrol, found in red wine.

Yet this book swings too far in the anti-Pollyana direction, relying overly much on fringe examples like the Gray Panthers and Leon Kass, chairman of the President’s Council on Bioethics under George W. Bush. Perhaps the author wants her anger to inspire readers to push for the changes in social policy that she endorses, such as subsidies for long-term care; however, she never makes that connection.

Most important, Jacoby does not give enough credit to the value of a positive outlook. Without denying the difficulties and pains of old age, why not try to get the best you can out of your remaining time on earth, seeking pleasure where possible, rather than endlessly complaining?

Old age may suck, but it sure beats the alternative.