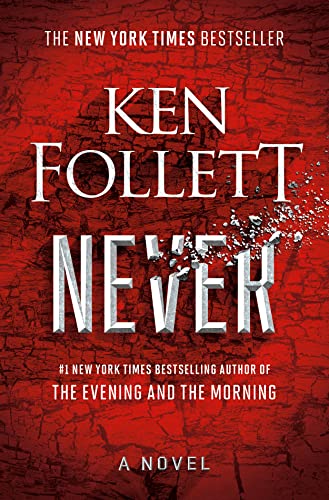 “The most disturbing part of this story is how close it could be to reality. One can only hope the appropriate leaders read this book and ask the question: ‘Could this really happen?’”

DEFCON 2 – One Step from Nuclear War; Armed forces ready to engage in less than six hours

DEFCON 1- Nuclear War is imminent or has begun.

In his latest book Never Ken Follett takes the reader through these five steps in a matter of weeks. It is an “unputdownable” book, in spite of how many times the reader breaks out in a cold sweat and tries to bury the book. It will continue to resurface until the reader is finished.

One would think that a book of just over 800 pages would be a daunting read, but if you have a week that you’re not doing anything with, you will want to pick it up and start with page one. You will reach page 816 and The End before you know it.

Follett takes the story on a nonstop trip from Chad in northeast Africa, to Washington, DC, to Beijing, China, to North and South Korea, neatly tying each location to the next and to the previous in a tight circle.

The main characters in Chad:

The search for Hufra leads them to a terrorist camp, al-Bustan. Their information results in the destruction of the camp, but not the discovery of al-Farabi.

From here, Follett takes us to Washington, DC, where the next set of characters surface:

Moving back to Chad, Follett begins to develop a relationship between Tamara and Tab that is fraught with uncertainty on Tamara’s part. It should be noted that Follett does a good job of putting the reader in a given character’s point of view, and not diverting from it, so we get to know many of these characters and some of their deepest thoughts.

And Follett also creates strong tension that is to be expected in North African and Middle East countries with gunfights and retribution that only serve to move the story into the next DEFCON stage.

And soon the story moves to Beijing, China, with the next players:

The opening salvo for the entry of the Chinese into the story is an American resolution to the UN presented as anti-Chinese propaganda. At this point Kai’s enemy, Li Jiankang informs Kai that his wife, Ting, has been critical of the party—a situation that Kai realizes was only a rumor designed against him, not his wife. And now Kai must deal with an American UN resolution and an attack on his wife.

Although North and South Korea will play a massive role as the story moves forward, the main characters are not developed until later, but should be identified:

With all the characters developed and waiting in the wings, Follett now moves the story across three continents, back and forth, and the situations begin to elevate.

Take the situations: an American resolution designed to embarrass the Chinese, an attack on American forces in Chad, heroin being smuggled from Chad to Europe, a stolen American drone used in an attack in Sudan, the discovery of a camp where gold is mined by enslaved humans, and human trafficking, mix those with cultural issues between the Chinese and the Americans, and then spice it all up with an arrogant little supreme leader just chomping at the bit to use his nuclear power against rogue fighters in a coup against him. Can the end of the world be far away?

With the coup against the Korean leader, the Chinese unable to control him, the internal struggle in China between the old-line communists and the younger more liberal leaders, an unworkable clash is looming. Retribution for all of the actions climbs toward an uncompromisable ending. And each action taken by the two Korean countries escalates drawing the Chinese and the Americans toward the abyss.

There are so many well drawn scenes in this 800+ page tome, that it is difficult to cover everything, but suffice it to say, every scene on every page in every chapter grows tighter and tighter until Follett plays out the final struggle with the inevitable ending.

The most disturbing part of this story is how close it could be to reality. One can only hope the appropriate leaders read this book and ask the question: “Could this really happen?”

If there is any drawback to the story, it is trying to keep all of the many characters straight. Names and positions sometimes become blurry, but on the whole, the reader will understand who is who.