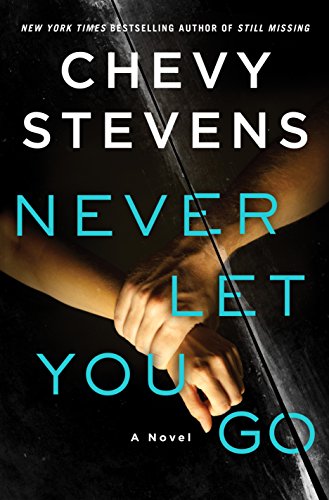 You don’t have to browse the bookshelves of your local drug store very long to find a stack of paperbacks that publishers assume (with good reason) will trigger an impulse buy. They’re all about a woman with a past, striving to conquer her fears as she struggles with family strife. She’s often attracted to a man she cannot trust, and usually stalked by someone who might be that same guy. She’s always vulnerable but with an innate strength, on the run until she “takes control” to vanquish her enemies and survive her way into a new life.

These books sell well because they’re fun to read. But that doesn’t mean they’re well-written, or very believable, or memorable since they’re so much alike. Until suddenly one comes along that charges way ahead of the pack. One that’s beautifully written, completely real, and certain to be recommended again and again.

That’s the best way to describe Never Let You Go, Chevy Stevens’ sixth thriller. Before you read a word you might see ample evidence of the industry’s belief in the book—a 125,000 copy first printing, glowing reviews in the trades, and plenty of blurbs from other thriller writers at the top of their game.

All of it’s justified and well earned by Stevens. From the beginning this story about Lindsey Nash and her teenage daughter, Sophie, is told with a sense of subtlety that somehow makes it more suspenseful and believable than any plot synopsis could convey.

The first scene, for example, is constructed to demonstrate the jealous nature of Lindsey’s husband, Andrew. It begins not with overt violence but with Lindsey making a valiant but addled effort to distract Andrew so he won’t become enraged after the accidental brush of her hand against that of a handsome waiter who’s just served her a margarita.

It doesn’t work. Andrew’s anger builds with the steady intensity of an oncoming thunderstorm as he responds with verbal accusations that are a chilling foreboding of what’s to come. He then gets his revenge with a cunning, malicious act: a threat against Sophie that’s scarier than anything he’s ever done to Lindsey.

That scene sets the tone for the rest of this story. The threat of violence is ever-present but always under the surface. There are no descents into dark basement rooms or desperate escapes through shadowy allies. Stevens chooses instead to spark fears based on real-life situations that arise once Andrew, who’s just been released from prison after killing an innocent motorist in a drunk-driving incident, tries to ingratiate himself back into Lindsey and Sophie’s lives.

Those situations take place in the current time period as Lindsey tries to stay financially stable by running a housecleaning business, and as her daughter Sophie grapples with the need to connect with the father she never had a chance to know. Much of the tension comes from the contrast between Lindsey’s knowledge of her husband’s dangerously twisted mind, and Sophie’s yearning to discover some goodness in her father. Lindsey describes to the reader things she’s never told Sophie, and Sophie doesn’t tell her mother that she’s meeting up with her father behind her back.

The ensuing tension between Lindsey’s fears and Sophie’s determination to ignore her own fears drives most of the story. On its own that tension could have easily kept readers turning pages toward the story’s violent conclusion. But it wouldn’t have been enough for Stevens, who integrates a shocking twist that’s unexpected but likewise completely believable: Lindsey Nash, the likeable single mom struggling to protect the safety of her daughter and herself, has a secret she must guard at all costs.

There’s little doubt this will become one of 2017’s bestselling thrillers. Chances are readers will also be thinking about it for a long time after. That’s good news for everyone who loves this genre, and a challenge for scores of writers yearning to create something that transcends it. Stevens certainly raises the bar, and proves it can be done.