Never Forget Your Name: The Children of Auschwitz 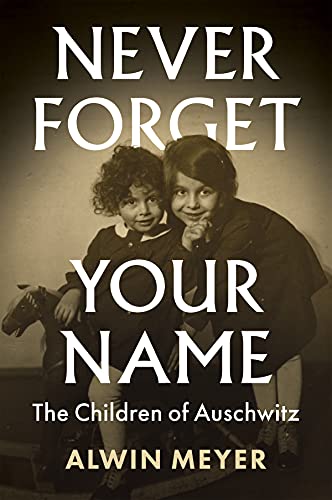 “Reading this book and using other books like it as teaching tools is critical, particularly in our current climate of racism and bigotry. If we are to grow together into a peaceful future, we must first identify the dangers of the past and be certain not to repeat them. This book is a great first step.”

“After taking every precaution, we pinched and closed the little tyke’s nostrils and when it opened its mouth to breathe, we gave it a dose of a lethal product. Without our intervention, they would have endured worse suffering, for they would have been thrown into the crematory ovens while still alive.”
—Jewish woman who gave birth while imprisoned at Auschwitz

Some nonfiction books about the Shoah are difficult to read, largely because they repeat verbatim the testimonies of survivors; and those testimonies are, minus confabulation, terrifying.

Some fiction books about the Holocaust are very difficult to read because their authors took the time to learn exactly what occurred in the Nazi camps—including war crimes testimony transcripts—and then they insert compelling fictional characters into those petrifying circumstances.

Both situations force the reader to view the veracity of Nazi genocide through the eyes of captured victims. Both types of books are extremely valuable for teaching the world about man’s ceaseless capacity for bigotry, brutality, vindictiveness, and mass murder against an innocent group. As anti-Semitism again rears its ugly head in the world, we must teach everyone, especially juveniles, about the terrible dangers inherent in racism.

In Never Forget Your Name: The Children of Auschwitz, author Alwin Meyer backs up his facts with almost 60 pages of references. The book is as truthful as possible, despite Nazi attempts to destroy their records of genocide against Jews, Christians, Poles, Roma, Sinti, Russians, homosexuals, the physically and cognitively disabled, and Catholics. Almost one million Jews were murdered at Auschwitz, dwarfing all other types of victims. It included the systematic enslavement and murder of hundreds of thousands of innocent Jewish families. Germany’s intention was to eradicate every Jew in the world. Horrific medical experiments were inflicted upon innocent victims, bereft of anesthesia, led by the infamous Dr. Mengele.

While this book is nonfiction, its descriptions are replete with shocking, uncommon detail and bursting with sensory evidence that brings to life pictures, sounds, smells, and tastes to the reader. These are not effusive, ornamental descriptions of the results of war. Here we are confronted with many different stories, as told by child victims of the Holocaust, in their own words.

For pregnant Jewish women in Auschwitz, a truly diabolical problem awaited. Jewish women were not allowed to keep a baby in Auschwitz. As part of the Nuremberg Race Laws, newborn Jewish children were to be killed. The mothers were faced with a uniquely chilling dilemma. If they delivered a live baby, the Nazi SS would smash its skull until it broke apart, tear the child apart (literally), or burn the baby alive in a stove or crematoria. These brutal actions were for the personal edification of the thugs, criminals, and ignorant people who were part of the Nazi SS.

Instead, it was up to each Jewish mother to save their baby from inhuman torture and murder —by killing it in a more humane manner. Can you imagine the dread and ongoing guilt? To prevent the SS from torturing and murdering the baby in a terrifying manner, it was up to Jewish mothers and other Jews in the barracks to perform the act of murder with compassion. Surviving Auschwitz women would then live the rest of their lives swept up by the maddening current of perpetual guilt.

This well-researched collection of true stories from Auschwitz is at times very painful to read. Yet we owe it to the hundreds of thousands of child victims of the Shoah at Auschwitz to read this important book. We also owe it to the countless children of the future, who can now read it and learn what the Holocaust was really like.

Only by understanding the veracity of our past, can our progeny enter the future without making the same mistakes that Nazi Germany did. Only by understanding and valuing the differences among us can the world grow compassionately and with empathy. Reading this book and using other books like it as teaching tools is critical, particularly in our current climate of racism and bigotry. If we are to grow together into a peaceful future, we must first identify the dangers of the past and be certain not to repeat them. This book is a great first step.