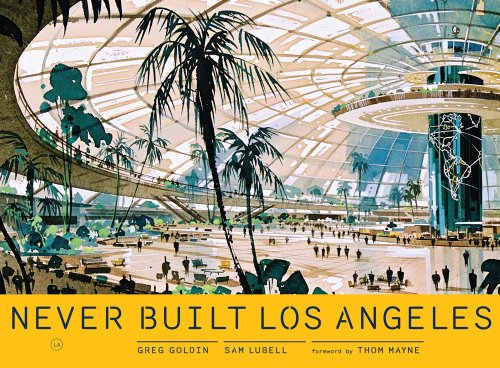 Sometimes “woulda, coulda, shoulda” reflections of what might have been concern the most trivial of topics, while on other occasions these reflections concern the most momentous, even majestic of determinations. Never Built Los Angeles is a most evocative, engagingly eloquent exemplar of the latter.

This volume addresses the dual realities that buildings start with ideas and that there are more ideas than buildings. Never Built Los Angeles celebrates “the degree to which architecture has always been unbuilt” for “the magic of the city exists as much as in the development of the blueprint as it does in soil and sky.”

With urban spatial patterns now and for the foreseeable future dominating the non-urban—for just as of last year more people now live in cities than in the country—this study of ideas about building is especially timely.

The authors underscore the important contribution of the unbuilt with the observation “We learn as much, and maybe more, about the city by looking closely at these scraps of ephemeral. The potential bound up in lost projects contains the spark of city building, past and future.”

While there is no paucity of books celebrating completed structures, access to images and renderings of those structures not built is far less prevalent. Consequently, this volume is particularly noteworthy, especially, as the authors observe, “It is invariably true that no rendering is worse than the completed structure.”

Implementing any project requires overcoming so many reasons why that project might not go forward Greg Golden and Sam Lubell write, “Completing any building, park or master plan takes a degree of cooperation and makes any other creative endeavor seem simple by comparison. It depends on so many factors: if the money doesn’t evaporate and costs don’t wildly escalate, and political fortunes don’t shift, and land barons don’t become distracted by more enticing pursuits, and apparatchiks don’t shred the drawings, a building might go up.”

Among the striking visual images are stylized aerial photos of the imagined future, dimensional architectural drawings, majestic works of art, all in the grand tradition of the graphic arts employed in the cause of salesmanship. Reading this volume, some might perceive what never was is so much more majestic and grandiose than what is.

Some concept are fanciful, others farcical; some both fun and fantabulous—on the one hand daringly creative, and on the other hand overtly clumsy—ranging from the wonderfully concrete to the whimsically comical. As the authors observe concerning their collection of “unbuilt proposals . . . these marvels include the energetic, the audacious, and the ludicrous.”

Organized in five sections, this volume collects 22 master plans, 41 buildings, 10 follies and amusements, 8 parks and plazas, and 15 transit plans. These presentations are especially important today in teaching “us about the nature of drawing itself, how the human hand expresses the mind’s aspirations—a connection that, with the increasing dominance of technology, is becoming increasingly lost.

In his introduction, the esteemed Pritzker Prize winner architect Tom Mayne laments the dichotomy between the physical form of Los Angeles and its reputation on the international stage “as an inexhaustible source of breakthroughs and design in urban planning.”

The city’s cultural architecture has evolved from “no longer mere experimenters on a domestic scale, but now major exporters of creative capital.” Distressingly, a “huge amount of talent in this city is being put to use in architectural projects globally, and, except in rare instances, has played littler role in shaping our public and globally.”

Tellingly Mr. Mayne notes, “The loss or displacement of intellectual creative capital that has occurred as architects move on to other cities, other countries, other opportunities.”

That said, this volume is especially important, for much of the design created in other places originates from architects based in and inspired by Los Angeles, which inspiration can be attributed to “the treasure trove of innovation contained” in Never Built Los Angeles.

Some of the ideas that were proposed but determined not ready for prime time in Los Angeles may be readily applied in other places. Indeed, it could be that the planners of World Islands, located four kilometers off the coast of Dubai studied the renderings of the plans for an offshore freeway running some six miles and connecting Malibu to Santa Monica with landfill pods providing marinas and waterfronts that were contemplated to accommodate 29,000 residents.

“Great cities rise around ambitions, often written in sticks and stone, and steel and glass” they write but the Los Angeles dissonance reflected in the place’s stature and physical form is the exception: “The city is a mecca for architects . . . and a roll call of modern architecture’s most famous talents. The entertainment hub of the United States, if not the world, it is a magnet for ingenuity, individuality, and imaginative ideas. Yet Los Angeles lacks the grand gestures of urban innovation.”

As a consequence “The gap between Los Angeles’s genius for design and its public output reveals a reluctant city whose institutions, citizens, politics and infrastructure, not to mention its sheer size, have often undermined inspired urban schemes.”

Applying their urban form version of the conclusion to the classic movie Chinatown about why things happen as they do in Los Angeles the authors conclude, “Maybe, in the end it’s just that Los Angeles thrives on inscrutable messiness, and any effort to impose major order is doomed.”

Produced in collaboration and support of the exhibition of the Architecture and Design Museum in Los Angeles, with 400 plus illustrations, Never Built Los Angeles deserves to be studied, savored, and treasured by all who care about places and their potential—and the chasm between the two.