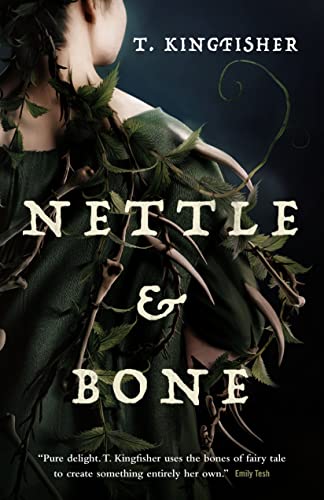 “Kingfisher has a singular talent for balancing frightening details with humor and characters who will immediately find a home in readers’ hearts. She also pulls bits and pieces from folklore to create a strange tapestry that somehow makes perfect sense.”

Fairy tales are so ingrained in the collective consciousness that many people don’t think critically about just how weird and fantastical many of the original stories are. T. Kingfisher’s latest book, Nettle & Bone, follows this tradition of glorious strangeness, and keeps the warmth that makes fairy tales persist from generation to generation.

The story starts in slightly alarming media res: meeting the main character as she’s painfully weaving together a dog made of bones, but it quickly flashes back to introduce Marra as the third princess of a small kingdom. When her oldest and kindest sister marries a prince, Marra is sent to become a nun, to keep her out of the way in case she might be needed to produce an heir at some point. Though this seems like a raw deal on the surface, Marra finds a level of contentment and peace with her life as the years pass.

But her oldest sister dies after falling down the stairs, and her remaining sister is forced to marry the same prince. Marra visits the kingdom while her sister is preparing to give birth and receives a chilling warning: Make sure you aren’t next. But when she presses her sister for information, no more details are forthcoming.

Marra is just an ordinary woman—nearly a nun, as she describes herself—and not the fairy tale version of a hero that’s often presented, but she resolves not to leave her sister to the deadly fate that seems to await her. And so she decides to ask for help.

Her first stop is to find a dust-wife, this story’s version of a powerful witch. When Marra requests assistance, the dust-wife demands three impossible tasks of her, which brings us back to the dog made of bones and the titular cloak made of nettles. The dust-wife is surprised at Marra’s persistence, and with much grumbling, she and her chicken (which happens to be possessed by a demon) pack their bags to save Marra’s sister.

Along the way they pick up more companions to form a ratag rescue party. A hulking ex-knight with a dangerous past is rescued from a gruesome goblin market, described in horrifying detail. Marra’s fairy godmother insists on coming along, bringing cheer and a talent for curses with her. And the dog made of bones lends his canine presence as well.

Kingfisher has a singular talent for balancing frightening details with humor and characters who will immediately find a home in readers’ hearts. She also pulls bits and pieces from folklore to create a strange tapestry that somehow makes perfect sense.

Instead of focusing on the scene-stealing heroes as most traditional fairy tales do, Nettle & Bone shifts the spotlight to the characters that would normally be shoved off to the side. Kingfisher gives them the rich stories that they deserve, and the narrative is all the better for it.

Marra may be seen as plain by the outside world, but she has a core of steel and dedication. The dust-wife affects toughness, but she has a soft heart, as proved by her unwillingness to leave the demon chicken behind. Meanwhile the godmother pretends to be all sweetness and light, but she has a bit of darkness in her that makes her interesting. And the former knight is tender and tortured by past dark deeds.

All these characters have traits that are enough like their fairy tale inspirations to be familiar, but what makes them fascinating are their differences. Even the canine companion proves this —he’s faithful and true, but he’s also made of bones.

Kingfisher’s storytelling hops effortlessly from lighthearted to sinister, charming to adventurous. She modernizes elements of stories that we’ve loved for centuries, adds humor, and most importantly, keeps the heart.