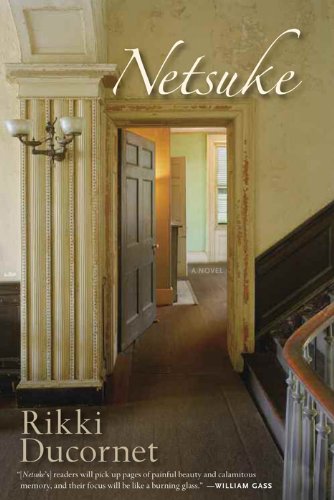 Netsuke is a fastener that secures the cord at the top of the sash, which holds traditional Japanese robes together. They became great objects of artistic expression.

The Netsuke in this story is a metaphor for the way a New York psychoanalyst is held together by his beautiful, artistic wife Akiko. It soon becomes clear that her best intentions and actions (or inaction) cannot save a sex addict who says of himself, “And if I am called The Marquis de Sade of psychiatry, what of it? Detested by some, venerated by others.”

Ms. Ducornet writes with velocity, immediacy, and impact. It only takes a few pages to be caught up in the mind of the doctor, as he is known throughout the story, which alternates between first and third person voice. The doctor lives on the edge, in a state of perpetual lies (to himself and others), and never allows feeling or emotion to interrupt his eroticized world (unless he remembers a painful time from his childhood). Speaking of his wife, he observes that, “Somehow, it never occurred to him that one day, she too would scowl, would join the scowling ranks he has left in his wake.”

This story has some fascinating insights and no-holds-barred language that is reminiscent of the work of the famed psychoanalyst and author Irwin D. Yalom’s novel, Lying on the Couch. Though the doctor couches all of his actions as empathetic and for the “good of his clients,” his real intentions are as transparent as glass. He is like a feral cat that has been put in charge of the hen house.

The one aspect of Netsuke that may dampen some readers’ enjoyment of the book is the lack of compassion or empathy for some of the characters, including for the doctor. It is difficult to care about someone when he appears to care little about himself. Others will enjoy the mental linguistics and self-incriminating, sometimes wry, observations the doctor makes, as well as the author’s raw and vibrant descriptions of sex—but with a mixture of both sorrow and pleasure.