The Nesting Dolls: A Novel 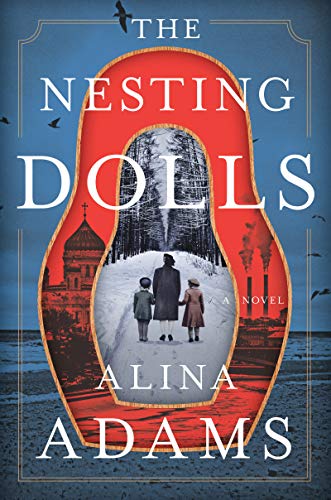 “this compulsively readable novel of historical fiction is about three courageous women trying to triumph over the forces of history and forced to make life-altering choices.”

Alina Adams portrays three generations of women, spanning the 20th century from Odessa 1931 until Brighton Beach 2019. This book is a historical family saga of three courageous women who have to make difficult personal choices about love and sacrifice in order to survive.

Odessa, USSR, 1931: Dvora Kanaganovith, or Daria, has a good life. She marries a well-known pianist, Edward, who is praised for his concerts. She lives in a small apartment with his parents, and their two young girls, Alyssa and Anya. Until one day there's a knock at the door. A Russian soldier tells them to dress and to go downstairs. They're told that Stalin ordered all Jews to relocate to Kyril, Siberia, in the Gulag, where the land is ripe with vegetables and fruit. They're packed into trains like sardines, with no food, and they have to sleep on the floor.

Although Daria hurriedly packs food and warm sweaters, Alyssa and Anya complain that they're cold and hungry. Daria, although also cold and hungry, gives them her own warm shawl. She tells them that they will be going to a better place. They finally arrive after a long and bitter train ride. In shock, they are forced to undress completely in front of the guards and are given work clothes that don't fit. They sleep in barracks, five or six crowded together in one bunk, and are forced to till the land from morning until evening with just a bowl of watered soup for nourishment. Unbeknown to them, the land is bare, nothing grows, their hands become red and chapped and their lips blue from the cold.

Although Daria loses her clothes, her precious possessions, and is deprived of food and shelter, she refuses to lose her dignity. "Daria again refused to perform as expected of her. Instead of cowering, she haughtily unhooked her brassiere and dropped the remainder of her clothes into the guard’s outstretched bag . . . all the jewelry she'd brought for bribes was gone." All they have is their bunk.

They realize that they are prisoners and were lied to about relocation. Daria tries to get Edward to smile or wink because he's weak, tired, and becomes melancholic. She tells him to follow the rules. "What had her husband uttered once regarding the arbitrary caprices of history, of life. "It's like music, Papa. You have to let it flow where it wants. You can't force it. All you can do is adjust the key and find your rightful rhythm within it." Stalin's idea was to deport the Jews to cold Siberia, in the North, to till the land and get the food they needed. "If the land didn't produce, they could blame themselves. Such was the unprecedented social justice of Communism."

Daria's resourcefulness and resilience eventually save her family when she gets involved with the head guard, Adam. "Adam's eyes wanted her. And she remembers how that look made her feel. Beautiful. Powerful. Exultant. Hopeful. Disloyal."

Daria is determined to give her husband back his dignity by shaving him with sharpened rocks and neatening up his ragged work uniform. Edward survives by listening to the music inside. He would never let them take his music. "He'd fought in his own way, in a way Daria wasn't used to, in a way she didn't recognize." By adjusting the key, he alters the circumstances.

Daria thinks that her actions and sacrifice are justified. However, does she realize that she's destroyed her husband in order to survive? Or is that the price she has to pay to get her family out of the Gulag and back to Odessa?

Odessa, 1970. Daria is now the matriarch of her growing family, including Natalia Nahumova, also known as Natasha, daughter of Alyssa and granddaughter of Daria. Daria teaches her that by following the rules, one can survive in any circumstances. Headstrong and stubborn like her grandmother, she refuses to obey. "Natasha stepped forward, ostentatiously confident in a way her mother insisted would get them arrested one day."

The story begins with Natasha, a brilliant student, applying to Odessa University to study mathematics. But she first has to pass a grueling examination. However, the examiners give her an impossible math problem to solve in 60 seconds. Then they test her loyalty to the Russian state. "My father is a decorated veteran of the Great Patriotic War. He gave his eye for the cause." Natasha fails the exam. She knows it's because she's Jewish. The Soviets are trying to keep Jews from entering prestigious universities. Devastated and angry, her only option left is to graduate from Teacher's College and teach math to elementary school students. Her roommate and best friend, Boris, also fails the exam.

Natasha perks up when she encounters Dima, an activist, who is refused entry to Moscow University to study medicine. "Ones they came up with," special," Dima explained, amused she didn't know. "They can't be solved; to keep Jews out of universities." Natasha is attracted to Dima, to Boris' chagrin. She dreams of seeing him again and having a romantic relationship. She's disappointed with her dates. They were either strict rule-followers, terrified of being disloyal, or louts who proclaimed their independence by stealing and drinking. She falls into melancholy. "Her days blended into the next, with Monday proving no different from Friday . . . Until Dima returned."

He asks her to come and see him at ten o'clock that night in another district. Thinking that it's a café and that he wants a romantic relationship, she puts on her best dress. She's shocked when she sees it's an older apartment building. She knocks at the door and a young woman, named Ludmilla, beckons her inside where ten other women are sitting around a table deep in discussion. But Natasha only sees Dima. "The way his silken hair shimmered; the way his translucent azure eyes glowed." Eventually, they have a romantic relationship, and she thinks he's going to marry her.

However, when she's asked to perform subversive activities, she realizes that Dima is a dangerous person who is willing to save Jews from further persecution by staging a revolt and getting them out of the USSR. He's even willing to put Natasha's own life in danger and has no intentions of marrying her. "This is our way out," he explains to Natasha. She's devastated when she learns that he and Ludmilla will be getting married. She tries to find a way out but delves further into betrayal and mistrust.

Defeated and exhausted, Natasha returns home, pregnant with Dima's child. "Dima was a hero, a risk-taker." But Natasha is a coward, standing by while her fellow Jews are being beaten and bloodied. When Boris welcomes her into his arms, no questions asked, she realizes that he's the real hero who'd risked loving her. Even Dima hadn't been able to do that.

Brighton Beach, Brooklyn, N.Y., 2019.  Zoe or Zoya, great-granddaughter of Daria is the third generation of Daria's growing family. Brighton is a low-income neighborhood, jam-packed with produce displays, fruit markets, and small apartment buildings. In contrast, Manhattan Beach is a suburban heaven with clean streets and large houses. Zoe dreams of leaving the suffocating streets and small minds of Brighton and moving to Manhattan, where her divorced, wealthy father, Eugene, lives in his own home.

Zoe finishes university with a promising career in software development. But her baba just wants her to get married. "You will never disappoint any of us. Your expensive school, your important career, and soon, a nice Jewish boy, yes? . . . You will be the one to achieve all of baba's dreams that she left the Soviet Union for."

Zoe is ashamed of her baba's Russian accent and that she still has the immigrant mentality. Eventually Zoe lands a job in a Translation software company, working for her boss, Alex Zagarodny, who is also the son of Russian immigrants. Her assignment is to research businesses in which her boss might want to invest two million dollars. He's developing a new coding app that hasn't been tried before and wants funding from big business. Her family is hoping for a marriage.

Alex gives Zoe a tour. She notices a dozen employees slouched over keyboards and screens. He introduces her to his chief engineer, Gideon Johnson. Zoe tries to talk to him but Alex pulls her away. Zoe is frightened that she won’t succeed in her assignment because her boss talks in technical terms she doesn't understand. Then he asks her on a date. Her baba advises her not to be honest with him but to keep her innermost thoughts to herself. So we have "following the rules" again. "Why you should always be careful! Nobody cares what we say. Why do we have to keep lying to each other?" . . . We're not in the USSR." Zoe, like her predecessors, remains headstrong and stubborn.

Zoe agrees to a date with Alex. But instead of an intimate evening, she's surprised to find herself at a Mix, Mingle and Pitch party. She feels very uncomfortable with all the wealthy businessmen. She's shy and has nothing in common with them. Not only that, but Alex pays her no attention while he mingles with his partners. She feels confused and alone. Alex later apologizes and, for the next date, he decides to take her to visit a museum. She's to meet him at his office.

When she arrives, Gideon tells her that he's in a meeting and to wait. In the meantime, she has a conversation with Gideon and finds that although he's Black, they have a lot in common. When Alex still doesn't show, she decides to see a movie with Gideon. After several clandestine dates with Gideon, Zoe finds that she's in love with him. But what would her family say about her not marrying a wealthy Jewish boy?

Zoe, who wants so much to leave Brighton for a better life, finds that what she tries to outrun holds her true happiness after all.

Spanning the 20th century from the Russian Gulag to the Soviet "refuseniks" to the oceanside of Brighton Beach, this compulsively readable novel of historical fiction is about three courageous women trying to triumph over the forces of history and forced to make life-altering choices.

Carol Katz has been a librarian and archivist at Montreal’s Jewish Public Library and an archivist at the Montreal Holocaust Memorial Centre. She also contributed to Judaism From a Woman’s Perspective: A Collection of Meaningful Essays Encompassing Judaism’s Philosophy, Law, History and Mysticism, Volume 2 and Mizmor L’David Anthology, Volume 1: The Shoah.