A Nest of Snakes: A Novel 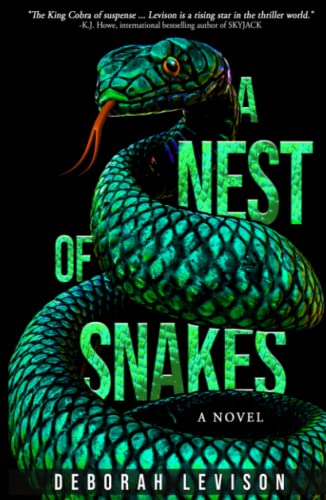 “Prepare for more twists and turns than a winding mountain road, as Levison has crafted a suspenseful, mesmerizing tale of terror and redemption.”

Brendan Courtland is a severely broken, middle-aged man. Decades after attending an expensive boarding school for boys, he is just a shell of the endearing youngster who was such a gregarious and loveable child. This is the story of a happy child, filled with promise, destroyed by deviant teachers, hostile students, and frightful administrators at a boarding school; and a tale of redemption after facing one’s terrifying demons.

Deborah Levison proffers a brilliant, gripping and evocative tale, with very well-designed, engaging characters, and a warning to parents and loved ones of children entering a boarding school. The kind of abuse depicted in this novel is all too real at some expensive schools. Forced to live away from their parents, often for the first time, these young students are a perfect prey for sexual, physical, and psychological abusers.

Before entering Torburton Hall, an expensive high school academy for boys, Brendan is a happy, well-developed, successful student and athlete. In less than a year at Torburton, all of these positive attributes change in a terrifying series of brutal events. The shame of being severely abused by older students, and raped by teachers and administrators, sends Brendan into a very emotionally dark place. Worse yet, he is petrified and burdened with guilt from the suicide of his cherished roommate, also an abuse victim. After two years of bullying, including mental, physical, and sexual abuse, Brendan falls apart psychologically.

The story begins with middle-aged Brendan, who is emotionally devastated and unable to escape from severe Agoraphobia. He is unwilling to be touched and powerless to form a friendship. His life is filled with terrifying nightmares, terror, guilt and anguish. Brendan lives in a huge mansion by himself, surrounded only by his housekeeper and her son, who is the landscaper and driver. Brendan has a desperate fear of leaving the grounds of his mansion. In fact, he only leaves to see his psychiatrist, and later to meet with his young, devoted attorney, Dylan James. She helps him travel back and forth in time to summon the source of the torture that Torburton inflicted upon him.

Deborah Levison adroitly carries us into vivid, deeply disturbing nightmares throughout this superb non-linear suspense novel. As the reader spies on Brendan’s past life at Torburton Academy, everyone turns against him, except for his housekeeper and her son. When he is an adult, his parents, his wife and his son abandon him in his most urgent time of need, because he is a broken man, laden with depression and anxiety. His father, a successful Hollywood director, is too busy to have a relationship with his only child. His mother is lost to Brendan as she focuses on becoming a socialite, rather than a being a supportive parent. Eventually, his father dies and his mother moves to Europe, leaving Brendan completely alone. But the psychological impairment from Torburton is alarmingly damaging.

Brendan’s psychiatrist makes no real effort to help him heal, focusing more on his own gambling addiction and using Brendan’s payments to pay his gaming debts. After years of appointments that yield no healing, he recommends that Brendan meet with the attractive young attorney (Dylan) who has an office across the hall. Eventually, Brendan tells Dylan the entire formidable story of emotional destruction at the hands of Torburton teachers and staff. They establish a constructive relationship and prepare for litigation against Torburton. The relationship between Brendan and Dylan is a critical aspect of this novel; as is the twisting court case and his stunning, final testimony.

Prepare for more twists and turns than a winding mountain road, as Levison has crafted a suspenseful, mesmerizing tale of terror and redemption. Her characters are very well developed and unforgettable. She has created a spellbinding page-turner that will leave the reader wanting more. That this kind of horrifying story actually occurs with students in boarding schools makes the book ever-more believable and terrifying.

Complicit in the abuse and its cover-ups are older students (bullying), teachers, coaches, mentors, administrators and even members of the Board of Trustees at Torburton. Students are forced to accept these twisted, evil power figures. If they object, they are threatened with severe punishment. When they call or write home for help, their parents are told by the school that it’s nothing to worry about. Some parents are simply absent of their own volition. In Brendan’s case, his father thought that the abuse would make his son “tougher.” The students are left to maintain their sanity following sexual abuse, with no one available to help them.

Some of the parents of abused students were themselves mistreated as children in similar educational institutions. They often consider boarding school as a rite of passage for their children. It’s a stepping stone to Ivy League universities. In other cases, parents’ recollections of their own abuse remain foggy, lost to confabulation.

When children offer tales of horrifying bullying and sexual abuse, their parents often refuse to accept it, to lend a hand, or to remove their children from school. In some cases, these parents remain completely self-absorbed or simply choose not to believe their children’s cries for help. Meanwhile, the abusing teachers and administrators are rarely caught. If they are discovered, they simply move from school to school to school, just ahead of the law.

A Nest of Snakes is a thrilling novel. The author’s wish is that her book will shine a light upon rampant boarding school abuse. In far too many cases, the wealthy parents of abused children simply fade away, enjoying their prosperity while their children incur irreparable psychological damage, with no one safe to turn to.

Levison is wisely reserved in spinning this tale of sexual abuse. Rather than describe deviant rapes in their most corrosive, aberrant detail, which would cause some to bail on the manuscript, she carefully leaves some of the very worst detailed aspects to the reader’s imagination. This book is thrilling, suspenseful, and very well written. Deborah Levison is a very talented author.