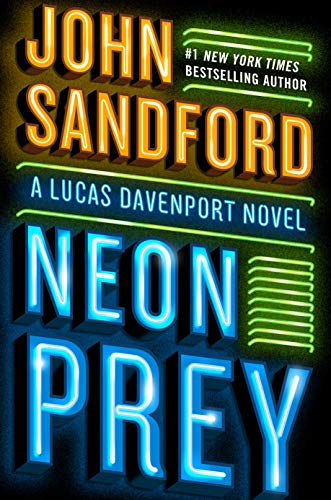 “Another entry in the Lucas Davenport series that keeps raising the bar on thrills and excitement, in a fast-paced police procedural.”

Clayton Deese is a two-bit New Orleans criminal, used by local loan shark Rog Smith to put the fear into customers who get behind in their payments. When a certain client defiantly refuses to pay, Deese is sent to make him an example. Unfortunately, things go wrong and Deese ends up arrested.

No problem there. He may be in house arrest until trial date, but an ankle monitor is an easy thing to get out of if you’re Clayton Deese, and that’s how US marshals Rae Givens and Bob Matees get involved.

Investigating Deese’s rural Louisiana home for evidence, they find the unexpected—more unmarked graves than they can count, and the worst of it is that some of the fresher corpses show evidence of cannibalism.

With the prospect of a Louisiana Hannibal Lector looming, Lucas Davenport is called into the case.

“Because of the political arrangement bringing Lucas to the US Marshals Service, he was free to pick his own cases. He was happy, as much as he’d ever been inside a law enforcement unit. Being a vigilante would be better but that was expensive and illegal.”

Tracking Deese to Los Angeles and a half-brother begins an odyssey that at times seems almost laughable if one has a distorted sense of humor, while in other instances, it becomes a reign of terror as Deese and his self-confident assortment of bank robbers and girlfriends head for the deserts of Las Vegas for a final showdown.

Like most Lucas Davenport stories, this one is heavy on the good-natured sarcasm between the protagonists punctuated with cynicism in regard to the antagonists, and an assortment of cold-blooded violence on the part of the bad guys.

Deese is portrayed as a cold-blooded killer, precise and methodical in his craft. His half-brother Marty and Marty’s gang specialize in robberies, equally precise but non-violent and extremely successful because of that fact. With Deese’s entry into their lives, things immediately begin going awry, and the group finds themselves being pursued by US marshals originally wanting only Deese.

At this point, they might generally be considered out of their depth and hapless as well as helpless, but just as the reader’s sympathy grows for their plight, events take a vicious turn and that sympathy disappears as the reader is again reminded what a vicious gang they really are.

When the action happens, it’s fast, violent, and generally deadly. It’s a case in which the victims aren’t the only ones becoming targets, for Davenport himself also gets in the way of a bullet.

Neon Prey is another entry in the Lucas Davenport series that keep raising the bar on thrills and excitement, in a fast-paced police procedural. Grab this one and give it an A++ for its well-written and neatly delineated characters.