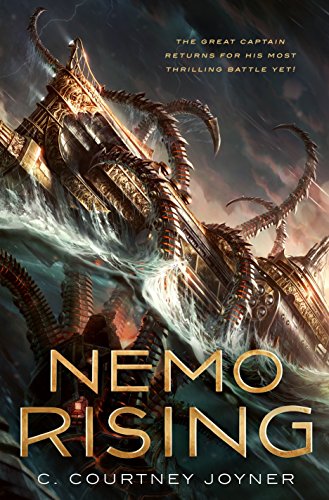 “takes a mighty swing at rebooting this franchise . . .”

Jules Verne’s 20,000 Leagues Under the Sea is one of the greatest science fiction novels ever written, and for readers of a certain age who grew up watching the classic Disney movie adaptation, James Mason will forever be the epitome of Captain Nemo.

This novel takes a mighty swing at rebooting this franchise by combining elements of a mystery thriller and steampunk science fiction into an action packed 300 pages that mostly, but not completely succeeds.

The plot begins quickly with Captain Nemo as a prisoner of the United States awaiting execution and his famous submarine, the Nautilus, impounded at the U.S. Naval base in Norfolk, Virginia. The mysterious sinking of ships off the American coast causes President Ulysses S. Grant to make a Faustian bargain by allowing Nemo to get back on his submarine and find out what is causing the loss of these ships before a war is ignited in exchange for his pardon and the return of his beloved submarine.

Where the book does well is the interplay between Nemo and the heroine, Sara Duncan, who becomes an unexpected crewmember on the voyage with her own secret agenda. The constant angst and barely repressed fury of Nemo is captured very well, as he carries out his own agenda, trying to determine the truth while avoiding getting entangled in a larger conspiracy.

The plot and pacing is also good. The reader has to keep up with a number of subplots and characters, wondering sometimes how they will all converge to solve the final mystery. No spoilers here, but rest assured the plot twists and turning points of the book will leave the reader surprised.

Unfortunately, the steampunk futuristic technology sometimes seems a bit outlandish. Verne was truly a technical visionary and the author tries to keep the spirit of the gadgets and technology from the original novel and its less well-known sequels, but at the end of the book, the reader is asked to really stretch their imagination and some aspects of mechanical and physical science to make the 19th century wonder-gadgets work.

The characters are also unevenly developed. Nemo gets the most attention, of course, as well as Sara Duncan and President Grant, and their characters develop as much more human and real than most of the other players, who seem to become more caricatures than characters. The final showdown between Nemo and the villain, again no spoiler alerts, seems almost anti-climactic, with Nemo’s enemy become almost like a James Bond super villain, supposedly larger than life, but coming across as rather clichéd.

The ending is about what one would expect from a thriller novel, and the reader is left wondering if a sequel is in the works already, clearly showing the author’s screenwriting pedigree.

This is an entertaining book and a quick read. As sequels and reboots go, it is a solid, but not spectacular effort to bring to a new generation one of the iconic anti-heroes of classic science fiction. If you enjoyed Jules Verne then you will likely find this book a worthy successor, and if you are a steampunk fan, this is definitely a book you should enjoy.