Nemesis: A Novel of Old California 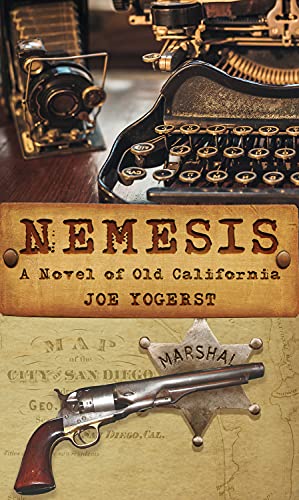 “What is wrong and what is right these days? It was getting awfully hard to tell in California.”

In 1888, a killer stalks San Diego. He’s already struck twice, horribly and coldly murdering two of the town’s most prominent men. Not only that, he’s written a letter to Nick Pinder, star reporter of the San Diego Times, justifying what he’s done.

This is a killer with a conscience, a man fearing how taking a life affects him.

“He didn’t want his heart to grow so dark that death meant little or nothing. But in the same breath, justice would not prevail unless he continued with his plan.”

Nick Pinder is an ambitious man, the kind who’ll stop at nothing to get a story, even if he has to correspond with a murderer to do it.

“Nick wanted more. Not so much the money gained from spreading his story around, but the satisfaction from having so many people read and praise his words. He wasn’t famous yet. Not beyond San Diego, but he would be.”

Eventually, through Nemesis, this zeal will bring Nick the fame he wants though it will cost him something more personal.

US marshall Cradoc Brandshaw was Nick’s best friend until the day Cradoc rode after a fugitive and was reported to have been killed. His sweetheart turned to his best friend for comfort. When Cradoc returned to San Diego very much alive, Nick and Roz were happily married.

The two men have been barely civil since but the current murders will bring their estrangement to an end while it tests Nick’s desire for notoriety and Cradoc’s promise to bring justice to the people of San Diego.

When Nemesis gives Nick the name of his last victim, including where and when he’ll be dispatched, offering a face-to-face interview afterward, Nick’s boss sees no problem in keeping the information from the law.

“‘We know the time and place. We are there when it happens. By choosing to do nothing, we influence the outcome.  It merely depends on how you want history to be written.’

What Nick doesn’t know is that he has a rival for the fame he’s seeking, someone who’ll do whatever is necessary to beat him to the story.

Both lawman and reporter are on a collision course. Choices between morality and friendship will have to be made. In doing so, someone is going to win and someone could lose.

Though this is ostensibly a mystery set in Old California, its title being the name the newspapers have given the killer, it’s in actuality about the relationship between Nick Pinder and Cradoc Bradshaw. Though scenes of Nemesis’ acts as well as his inner turmoil at what he has done are interspersed with the narration, the story centers more on Nick’s driving ambition and Cradoc’s unexpected slide from loneliness to again falling in love.

This isn’t to say the mystery takes a backseat to those two characters’ stories, for Nick’s ambition is furthered by his desire to solve the mystery no matter what and gain nationwide recognition and fame while Cradoc merely wishes to bring about the justice he’s sworn to uphold.

The author has definitely done his research, bringing San Diego and its inhabitants alive via his descriptions and dialogue. Based on actual events, the story abounds with fictional and nonfictional characters, including Wyatt Earp who lived in San Diego during this time. The victims are patterned after real-life individuals who lived during the time period and were involved in acts comparable to those committed in the novel. Modern-day inventions—typewriters, telephones—make their primitive appearance and play an important part in solving the crime.

Nemesis is a taut mystery and a satisfying one, combining the desires for revenge, ambition, and justice, as it echoes Cradoc’s rationalization: “What is wrong and what is right these days? It was getting awfully hard to tell in California.”