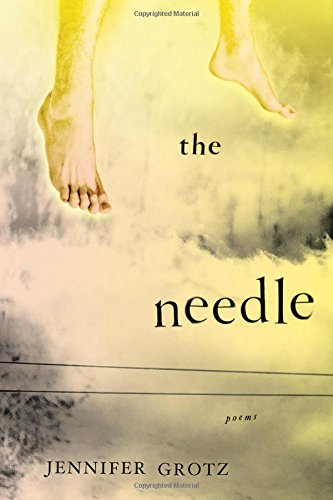 The title poem in Jennifer Grotz’s second book, a poem placed before its three sections, opens with an epigraph from Samuel Daniel, “When your eyes have done their part/Thought must length it in the heart.” Ms. Grotz’s poem then begins,

“. . . Thought lengths it, pulls
an invisible world though
a needle’s eye
one detail at a time,”

Ms. Grotz describes a strategy employed in some but not all of the poems in this book that mirrors the mind’s rearrangement of observed visual details, details that in the first section capture street scenes and cityscapes in Krakow, Poland; in the second section her native west Texas; and in the final section various locations on this continent as well as the French Riviera and Alexandria, Egypt.

Ms. Grotz’s first book Cusp introduced readers to her calm, detached poetic voice. In The Needle the mind rearranging visual details is keenly intelligent and linguistically gifted, but the poems that this reader finds most engaging are less detached, ones where the visual details either resonate with the subjective part of Ms. Grotz’s mind to reveal her inner life and/or refer to relationships or at least interactions with other people.

“One way to survive is to be a little piece of scenery
Among the mirabilia of the square, spending one’s time

In an outdoor café while a weather system of people
Drips ice cream on the ground. ...”

The “weather system of people” consisting of tourists and street performers gives way to an actual windy rain storm, after which,

“It is hard to know which view is really reality: the square itself, wiped clean
Of all the people, or the incomprehensible shuffling of the people

Who are incomprehensible and shuffling all over the world, all the time.
Either view scours the heart, keeps down its wild romantic notions.”

The two views, the concrete and the intangible, reappear, as does a rainstorm,
in “Alchemy,”:

“All day the city went on being a city we traversed
as if it could be conquered by touch,

leaning against stone walls and wrapping our fingers
around rails overlooking the river.

And all through the city, the day went on being a day
blazing ruthlessly, even when it started to rain,

and dusk doused the flames in greenish smoke.
That was more or less the recipe to make night,

when the city writes its unspendable wealth inside us.
When a pebble becomes a bright coin on the sidewalk,

where a black ermine scurries under a car
to replace motor oil rushing into the gutter.

And I become a bird squeezed in a boy’s dirty palms
while you digest an iron egg of dread,

the empirical result whenever moonlight
takes shadow to be her lawfully wedded husband.

One’s fate in this city is to come and become and be overcome.
In each of us a mad rabbit thrashes and a wolf pack howls.”

To whom do the pronouns in this poem refer? Does the “we” in the first line refer to Ms. Grotz and either a traveling companion or the deceased brother she introduces in the book’s second section, or to two sides, one adventurous and one cautious, of Ms. Grotz’s personality, and if the latter, are they the “I” and the “you” of the eighth stanza? The cautious side seems to see adventure as soiling--the ermine juxtaposed with the motor oil in the seventh stanza, the bird squeezed in dirty palms in the eighth—perhaps reflecting a traditional Christian view of sexuality, sin, and the soul, and the adventurous side sees caution as constipated.

Note in the penultimate line how Ms. Grotz turns Caesar’s “I came, I saw, I conquered” into “to come and become and be overcome.” The final line reveals the restless spirit that underlies Ms. Grotz’s calm, detached demeanor.

Whether or not Ms. Grotz’s comparing herself to “a bird squeezed in a boy’s dirty palms” in line 15 of “Alchemy” refers to an actual or imagined vacation fling, in the next poem, “The Pearl,” a romantic encounter with a stranger costs Ms. Grotz a pearl earring. “The Umbrella” recounts a happier, if awkward, romantic scene:

“We stood together, sharing an umbrella.
You held it above me, drenching your left shoulder,
unaware of the cold stream slicking off the canvas
down my back. When you asked why I gasped,
I didn’t say a word, happy
to wait with you under an umbrella
until the sky proceeded elsewhere
escorted by the wind.”

Along with the showery imagery there is also the incendiary. In “Not Body” the speaker is unsure how physically intimate she wants to take her vacation romance; again, as in line 16 of “Alchemy,” the speaker addresses a cryptic “you:”

“Let a little light come tell me what.
Let a flicker make me brave.

I’ve always insisted on you. If I could
be sure. If the night were safe, not slippery
like a flame. If the body were more than a clock.
If the body could be seen through like a window.
If the body lives to be burned.

Then you: unpredictable and loyal. Then you:
snuffed out, or replaced
with the sweet valedictions of smoke.”

The poems of the second section are autobiographical and begin with the death of Ms. Grotz’s younger brother, which in “Silence” she sees as a reversal of roles:

“I mothered you, I protected you,
you were my baby, my toy,
so there was no need for you to speak
when, at the dinner table, our mother asked
would you like some green beans
because I would answer, ‘No thank you,
but he’d like another helping of mashed potatoes.’
Years later you assured me I always got it right,
that I was given the power to say what you felt.
But I see it differently
now that you’ve gone ahead of me into death,
now that it’s me left speechless:
we were taking turns.”

Ms. Grotz returns to the theme of recollected visual details in “The Ascension,” a poem that refers to the book’s cover art, “Two feet with delicate toes point down/to the astonished heads of twelve apostles.” But it is not the sight but rather its recollection that interests Ms. Grotz:

“And when you look away, you’ll still be a witness
to disappearing instants, you too will be
an apostle of the now.”

In the poems of the middle section of The Needle Ms. Grotz resorts to stock imagery to recall the west Texas of her girlhood as a flat desolate corner of the desert with paved two lane highways, electric wires, convenience stores, men with nothing to do but consume six packs of beer, women who apply cosmetics to tear streaked faces, the Lutheran church where she was taught the doctrine of original sin, a field where she spent hours observing prairie dogs and watching the stars come out, and a building where her restless and mentally unstable brother committed arson, a crime that haunts her in “Landscape with Arson:”

“Something can stop being true in the time it takes
a cigarette to burn to its filter. It was your crime
but it’s me who goes back to the scene . . .”

The Needle’s final section takes us to the more stimulating landscapes and cityscapes, topographical and cerebral, of the adult Jennifer Grotz. In “The Mountain” she describes becoming one with the mountain she is walking up. By contrast,

“It was not this way with you, that other mountain
I seemed to climb outside of time, never understanding
its true form or height. I climbed you and you climbed me
is how I might describe it. . . . ”

She pauses halfway up

“for the mountain was steep and it had become sad to think
that to be a Jennifer meant to chase endlessly after desire
or else to live without it.”

Resuming her ascent, both topographical and interior, she reveals, “. . . I love stubbornly/and filled with shame...”

“I love what I long not to love and what I would in fact
like to hate. And I have done this for years,
housed two adversaries who have
strengthened themselves purely in fighting
each other, like two gleaming boxers articulating
a problem to be solved in twelve timed rounds.”

At the top of the mountain she arrives at a glacial lake.

“I spent several minutes there, seeing the world
and forgetting the self and then seeing the self
and forgetting the world, the world that was
a mountain lake with the remnants
of a beachfront barbeque, and the self saturated with joy
like melted butter absorbed into a plate.
And though I memorized all of this to tell you,
as I am doing now, I felt regardless of what
I might succeed to describe,
I had come upon it too late.”

Ms. Grotz’s “you,” who is perhaps less cryptic since she introduced readers to her deceased brother in the book’s middle section, makes another appearance in “Ghost”:

“If a boat on water
asked the water to be still:
that’s the nature of my want.
You wash over me in gusts.

Few things can be held in hand,
fewer than the mind.
And the heart, holder
of innumerable devotions,

has no compass, only scale
to overcome the soul’s
indifference. The eyes are doors
but otherwise are useless.

There are many ways
to navigate, to be misled.
So I will be restless.
No, I will be still.”

Note how for Ms. Grotz, who most values the mind’s eye, physical “eyes are doors/but otherwise are useless.“ In addition to physical and mental landscapes Ms. Grotz also includes a lovely domestic scene in “The Record”:

“Kisses too tasted of iron
the year we lived in twilights. They tilted warily
like bags of groceries I’d carry up the stairs
to find you in boxers, the smell of coffee mixed with vinegar
from the bowl of pickle juice you soaked your fingers in
trying to hurry the calluses. We trafficked in the grief
of incompatible day and night, we stretched the hours
as best we could, but mostly we practiced
a kind of starving, excruciating to recall
how hard we tried. I’d unpack the groceries
and tell you about the day, and after dinner
you’d pick out a tune on the guitar
(it was the year you apprenticed to the blues).
Before each night shift, in uniform and socks,
you’d climb into bed and hold me until I fell asleep.
Then you would quietly slip out.
And when I dreamed, I glimpsed the gods in you,
I dreamt you were Hephaestus with the iron forge,
the sweat covering you when you jogged home
was holy, it was the sweat of the whole city,
even the roses, even the bus exhaust.
The mind circles back like a record spinning,
a little molten, a little wobbly, a record
shiny as your black hair, a record player
crackling and stuttering over a scratch, an urge
to ask forgiveness even though it’s dark now
and you’ve already forgiven me.”

Forgiveness? What man wouldn’t be flattered and grateful for such a portrayal? Note also the temporal aspect of “The Record,” the stretched hours in line seven, for example. In “Sunrise in Cassis”

one laughs least. The hour of cold floors,
of pupils adjusting in the early light.
The hour waiting begins for something

one recognizes only after it’s passed.
So while the blue of the sea blends with the horizon
I ask to understand the difference between silence and

Indifference. I ask time to be wise as an editor,
not to elide this hour
. . .”

Let this review conclude with an expression of gratitude to Ms. Grotz for sharing her inner life and its conflicts via her mind’s eye and poet’s ear in The Needle.