Nearly Nero: The Adventures of Claudius Lyon, the Man Who Would Be Wolfe 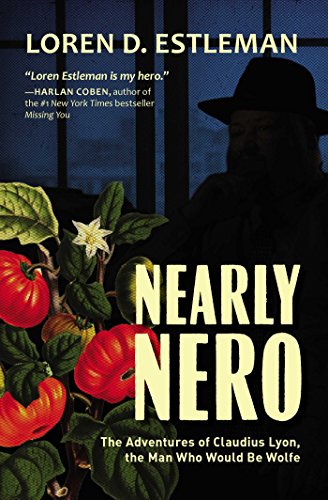 “clever, filled with puns and acerbic wit, and good fun to read . . .”

Once upon a time there was a man who was a Nero Wolfe fan. So much so, in fact, he wanted to be Wolfe, or as much like him as possible.  Unfortunately the only things they had in common were their size (in proportion to each other’s height, of course), and their ability to solve mysteries without leaving the comfort of their homes. The man was also independently wealthy, thanks to his inventor father, so he decided to set himself up as a private detective; in other words, he would be Wolfe in everything but name, for he would be Lyon.

“Lyon loved to read mysteries, but he knew he’d never have the energy to emulate Sherlock Holmes, or the physique to withstand and deliver beatings a la Sam Spade . . . Wolfe’s obesity and sedentary habits suited him right down to his wide bottom.”

These are the adventures of Claudius Lyon, Nero Wolfe-wannabe, as told by Arnie Woodbine, his chronicler, secretary, aide, and leg man.  Unfortunately, everything about Lyon, from his five-foot, overweight frame to Arnie himself, is a little skewed from any resemblance to his idol.

Though he has the private home, is a horticulturist, has a chef, and the aforementioned secretary, Lyon lives in Flatbush, instead of Manhattan; he doesn’t grow anything but tomatoes; his chef only cooks kosher; and Arnie? He’s a confidence man, a gambler, and isn’t above fleecing his employer by doctoring the household accounts, as he’ll frankly admit.

“I’m always honest about my dishonesty. I’m a good confidence man in the second class and a first-class forger. I’ve got diplomas from two institutions to prove it. I don’t have them on me, but you can confirm it by calling my parole officer.”

Nero Wolfe is very much a presence in these stories. In fact, Lyon daily expects to find Wolfe’s lawyer on his doorstep with a “cease and desist” order.

“I am,” Lyon replied. “When he learns I’ve counterfeited his life and livelihood, I fully expect a visit from Nathaniel Parker, his attorney . . . I’m a fleabite on Wolfe’s thick hide . . .” He slumped in his oversize chair, looking like Humpty Dumpty at the base of the wall.

Nevertheless, when it comes to mysteries, Lyon shines, to the chagrin of Captain Stoddard of the Bunco Squad, his nemesis.

Lyon plies his trade without a license and gets away with it by not charging for his services, but Stoddard is determined he’ll one day catch money changing hands and be hauling not only both away to jail.

So far, he hasn’t succeeded.

Told from Arnie’s point of view, with plenty of wit and verbal agility, there are ten stories in this collection, including one never before published. Also prefacing the anthology is the introduction author Estleman was invited to write for the re-issue of Wolfe’s novel Fer-de-Lance, in which he expresses his own acquaintance with Rex Stout’s novels as well as his love for them and their main character.

Though there are no murders or mayhem, and absolutely no bullets, Lyon shines, in his own way as perspicacious as his idol. Most of the mysteries are no more than riddles instead of danger-fraught thrillers. In fact, they may remind some readers of those “brainteasers” they were subjected to in school. No matter. Each one is clever, filled with puns and acerbic wit as spoken by Arnie, and good fun to read.

Nearly Nero is an anthology that will appeal to both the Nerophyte as well as any reader who may not have had the good fortune to learn of Nero Wolfe. Claudius Lyon isn’t a poor substitute; he’s simply a very accomplished mini-me version of the master. Imitation is the best form of flattery, and Loren Estleman has flattered very well indeed.