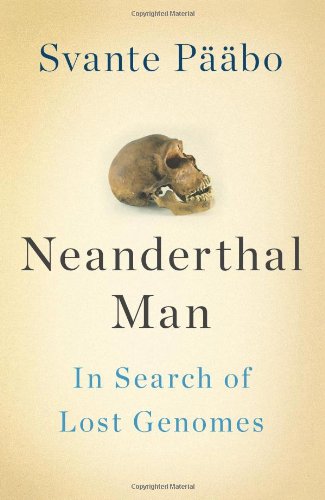 “Neanderthal Man forces us to consider how scientific knowledge is created. . . . The idea that there is a species both so human and not-human is fascinating and challenging.”

Neanderthals manage to capture imagination through a celebrity status that few fossil species can dream of. Neanderthals entered the world of natural history through Johann Carl Fuhlrott’s 1856 fossil discovery in Germany and then appeared in Thomas Huxley’s 1863 scientific treatise Evidence as to Man’s Place in Nature. One hundred and fifty years post-Huxley, geneticist Svante Paabo explores a new type of human evolution research; Neanderthal Man: In Search of Lost Genomes details Paabo’s work with ancient DNA.

It’s hard to find a hominin species that so completely straddles the boundary between the sciences and the humanities. Certainly, the middle ground of murky metaphysics would seem to help explain the practically unending public and scientific interest in all-things-Neanderthal, from their genes to their culture. Indeed, there’s something fantastically tempestuous about how we think about Neanderthals—they seem to function in evolution as a phylogenetic foil, playing Caliban to our Aerial self-perception.

All of the celebrity and curiosity that surrounds Neanderthals fuels the research questions that underlie a lot of Neanderthal studies. There’s a desire to categorize and makes sense out of what makes us human and what makes Neanderthals not. Biology? Genetics? Culture? How do we make sense of similarities and differences between fossils and living species? Neanderthal Man’s gives us answers to these questions from the genes and genetic code of our nearest evolutionary relative. (“The fault, dear Brutus, lies not in our stars, but in ourselves . . .”)

Neanderthal Man, however, more than just the story of discovering and sequencing ancient DNA. Paabo shares stories of laboratory experiments and the uncertainties of doing science; he shows us the day to day, nitty-gritty of science. The real strength of Neanderthal Man, in some ways, is its gesture toward sociology of science as it describes a new field of genetic research. (Indeed, in many ways, say, in the devotion of pages, the story of the Neanderthal DNA sequencing is very small compared to the other aspects of the book.) Neanderthal Man ought to be read as a book with several “super stories” or “meta stories” about the nature of science and scientific process.

In Neanderthal Man, we see the story of how a scientific field was created. There are episodes of frantic phone calls; the tedium of waiting for laboratory results; the give and take of ideas; and the frustrations of irreproducible experiments. Paabo shows his readers that the nature of “doing” science is full of messy, complex, nonlinear parts where answers are practically accidental.

On one of those “meta levels,” Neanderthal Man documents how a new scientific subfield (ancient DNA studies) came into existence. We see the early-days somewhat haphazard events of the early 1990s – projects that, in retrospect, led to a project like Neanderthal genome sequencing. Paabo’s experiences highlight the necessity of curiosity and inquiry in a lab environment for big projects, like Neanderthal sequencing, to be successful.

As the field of ancient DNA analysis has come into existence within the last twenty years, we see the techniques for sampling, the methodology of analysis, and the intricacies of theory come to influence each other through a see-sawing back and forth of scientific process. In Neanderthal Man, Paabo shows us the early stages of ancient DNA analysis through his work with Egyptian mummies. From there, we see the complexities of developing a technique for sequencing, exploring insects in fossilized amber (yes, the original Jurassic Park motif), and from there, he and his team toy with the possibilities of sequencing a Neanderthal genome.

It strikes me that Neanderthal Man’s explores a very interesting underlying problematique in science: Neanderthal Man forces us to consider how scientific knowledge is created as a new scientific discipline forms. As such, there is an interesting dialectic between method and theory in science that builds throughout the book. We, as non-members of Paabo’s lab and outside of his expertise, want to know how and why geneticists know what they do.

As a broad narrative, Neanderthal Man helps us explore the relationship between method and theory as part of the scientific process—the development of a scientific discipline (or subspecialty in science) is, perhaps, the most interesting meta-story to come out of Paabo’s work and one that gives us far more to chew on than the results of the Neanderthal genome, exciting though the results are.

Reconstructions of Neanderthals—imagined likenesses, if you will—have captivated the public since the species was first unearthed. We love the stories of Neanderthal discoveries and the complexities of their changing interpretations within science. The idea that there is a species both so human and not-human is fascinating and challenging. We want a face to put on the fossil and, with the publication Neanderthal genetics, we want to know more about how like and not-like us Neanderthals were.

Svante Paabo’s Neanderthal Man, is an important consideration of all of these questions; however, it takes us a step farther and explores, perhaps unintentionally, the very foundations of doing science.