The Nazis Knew My Name: A Remarkable Story of Survival and Courage in Auschwitz 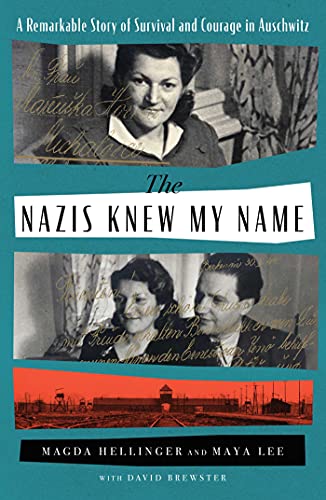 “Magda was resilient, courageous, fearless and daring. She was always hopeful and optimistic. These were the qualities that helped her survive the atrocities of Auschwitz-Birkenau and save the lives of countless others. She never saw herself as a savior, nor as being on a mission. She was simply someone who saw opportunities and had the fortitude to navigate the conflicting emotions of fear and hope—and to help others do the same. These qualities also helped her after the war.”

In a time before there were Nazis, a mother took her daughter to a well-known and respected rabbi, who foretold that the girl would one day be in a position to help save the lives of hundreds of other Jews. “It was preordained,” he said. She would recognize it as her duty to save as many lives as possible.

In March 1942, 25-year-old kindergarten teacher Magda Hellinger was among the first Jews captured by the Nazi SS and sent to Auschwitz-Birkenau. In an effort to deflect attention away from themselves, the SS decided to put Jewish prisoners in charge of day-to-day leadership.

Over the next three years, Magda Hellinger was one such prisoner, designated as a block leader, then elevated to positions of increasingly higher responsibility, until more than 30,000 mostly-Jewish prisoners were under her care, in a place called “Camp C.” She clearly understood the prisoners’ conditions, communicated exceedingly well with everyone, and relentlessly struggled to help prisoners avoid brutal punishment inflicted by the SS upon prisoners who disobeyed rules or were too sick or injured to appear for daily roll call.

Magda did not seek out attention or leadership positions. She only wanted to be a kindergarten teacher. But the SS realized that she was well-connected among the prisoners. They knew that she was dedicated to helping organize them and that she could motivate them to do as they were told. Magda was the girl ordained by the rabbi with the responsibility to save lives. It became her life story.

Using Magda’s memories and completed by her daughter’s wide-ranging investigation, this is the true story of how one young teacher fought the Nazi SS every day in the most infamous and evil death camp in history—and she won! Magda employed her intellect, connections among prisoners and Nazis, dynamic personality and reputation, to protect thousands of women from the Auschwitz gas chambers.

Exposed to the same starvation, sickness, ruthless beatings, and slave labor as other prisoners, Magda survived by using her substantial wit and by employing her uncanny ability to develop functional relationships with prisoners and with Nazi leadership. She was perceptive and shrewd in dealing with infamous Nazi characters such as Dr. Josef Mengele, who performed medical experiments on Jews without anesthesia. She had a working relationship with the camp commandant (Kramer) that enabled her to save victims from gas chambers. And she manipulated the infamous and vicious female SS guard, Irma Grese, who had a passion for beating prisoners with her whip.

Though the Nazis appointed Magda to positions of leadership and some had friendly conversations with Magda, her sole focus was to save as many lives as possible from the Auschwitz gas chambers; she also did her best to prevent the sick and injured from “Kommando” work (severe hard labor outside in all conditions).

Magda often used friends in the kitchen to access more food for the sick, the starving, and for those dying from forced labor. She had a talent for making friends everywhere and for being honest, dedicated, and reliable. She used her connections with the Nazi SS to make conditions in her part of the camp better for prisoners.

This remarkable book offers a glimpse into daily life for Jewish prisoners in the Auschwitz concentration and death camps. Some readers may find this story difficult. But the Holocaust was the most devastating genocide in history. To sugar-coat the experiences of Holocaust victims would do a disservice to readers and especially to the memory of brave victims and their families. This memoir accurately describes the life of those who suffered the daily pangs of starvation, rampant sickness, brutality from cruel guards, and the physical deterioration resulting from daily hard labor.

To this extent, Magda’s story remains clear, focused, unadulterated, and fixated upon reality. When surviving each day was the greatest possible accomplishment, when surviving a death march seemed impossible a handful of resourceful Jews, like Magda Hellinger, were able to scam the Nazis using nothing more than their instinct, intelligence, and bravery.

The veracity of Magda’s accounting of life in Auschwitz can be empirically verified through hundreds of viable prisoner accounts during this horrific time for European Jews, Roma, the disabled, homosexuals, and those deemed insufficiently Aryan. It also coincides with many university research projects and especially post-war trials that revealed in detail what life was like in Auschwitz.

While the authors of this book did not include a report on research that was used in compiling this victims’ account, a memoir is not held to the same empirical regimen that a university research project would require. But from this reviewer’s perspective, which includes years of Holocaust research and publication, and having interviewed many survivors and reviewed dozens of books about the subject, Magda’s account of life in Auschwitz appears very factual.

Although Magda was singularly devoted to assisting prisoners with survival, she somehow also became a trusted part of the Nazi machinery, helping them to maintain a viable workforce. In doing so, she prevented Nazis from sending thousands more Jews, “up the chimney” (to the gas chambers and crematoria), which daily belched the acrid smoke of lost lives, absent futures, and innocent families murdered for their choice of faith.

The little girl whom the rabbi said would be in a position to save lives in the future did exactly that. Whether this was fate, preordained destiny or G-d’s plan for Jews . . . we’ll never know. What we know for certain is that Magda Hellinger stepped up with momentous valor to save as many Jewish lives as possible. She accomplished this with her resourceful mind and substantial courage. Anyone interested in learning more about the lives of Jews interred in Nazi concentration and death camps should find this book valuable, interesting, and thought-provoking.