Nazis after Hitler: How Perpetrators of the Holocaust Cheated Justice and Truth 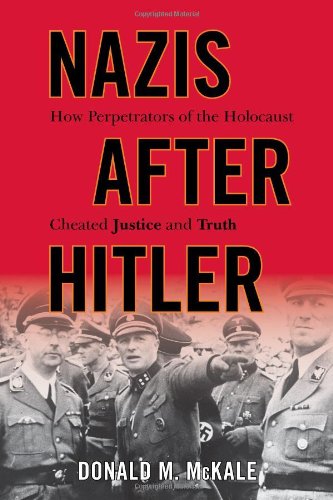 “No one owns the Holocaust. Professor McKale expresses the notion that those who deny the Holocaust thereby deny that Israel has the right to exist.”

There are probably few scholars as knowledgeable in their special field of study as Donald M. McKale, particularly when that scholar is recognized simultaneously for the excellence of his pedagogy.

Nazis After Hitler, Professor McKale’s most recent work, considers the criminal careers and ultimate fate of roughly 30 prominent Nazi minions whose purpose it was to manage the regime’s archipelago of concentration camps, and the systematic murder of “undesirables”—e.g., Jews, Gypsies, homosexuals, political enemies, Freemasons, and others—taking place in them.

The author’s thesis is that the victorious Allies and the two successor German states failed to bring the perpetrators of these crimes to justice.

To prove this thesis the author focuses upon the fact that so many of the defendants were either acquitted or given sentences incommensurate with their crimes, that they were allowed to plead their innocence, and that among the criminals in question there was virtually no sense of remorse or guilt.

There is no question, of course, that the perpetrators portrayed in Dr. McKale’s work carried out the bloodthirsty policies of one of the most vicious political regimes in history, or that many of them denied their guilt, showed no sense of remorse for their crimes, and either escaped punishment altogether, or received insufficient punishment in view of the enormity of their crimes.

Professor McKale’s approach to these issues, however, is not at all calculated to shed new light upon them. There are many reasons for this, and hence we can treat them only briefly, in view of the limitations on space under which we operate here. Nevertheless, it is important to illuminate these issues, even if only briefly.

There is first of all Dr. McKale’s exaggerated concern with the fact that nearly all of the perpetrators denied their personal guilt as to the crimes for which they were accused. That this point should be raised and belabored throughout the book is a matter of some concern.

There are several good reasons why the perpetrators denied their guilt, not the least of which is that all of them were human beings. Except in very few cases, human beings do not admit their crimes unless to do so will result in a reduction of their punishment.

Apart from this natural inclination of humans to protest their innocence, many humans suffer from maladies of the brain to such an extent that they have difficulty distinguishing between “right” and “wrong.”

Finally, there is no lawyer in the world who, in representing a person charged with heinous crimes for which the punishment is death or long imprisonment, would permit his/her client to utter an admission of guilt, whether before or after the client’s trial, and whether or not the client has been found to be guilty.

For most of the same reasons, defendants do not express regret or sorrow for their crimes, except perhaps in cases where the defendant is about to suffer imprisonment for life or execution, and no reprieve is possible.

There is also Professor McKale’s assertion that the judgment and sentencing of the International Military Tribunal aided defendants in both avoiding punishment and continuing to perpetrate lies about their own innocence and the nonexistence of the Holocaust as an historical event. He claims that the court “lumped in” the Holocaust with other “crimes against humanity” instead of making it a separate crime, failed to call many surviving Jews as witnesses, relied too much on Nazi documentation for probative evidence, and “did nothing to sympathize with the victim’s suffering.”

In fact, the IMT adopted an approach to evidence that was less “technical,” thus permitting the prosecution to elicit a broader range of both oral and documentary evidence, all in the interest an expeditious trial.

And if Dr. McKale believes that the work of the IMT was insufficiently “sympathetic” to the victims of the Holocaust, how credible does he think the outside world would consider the findings of the Tribunal if it had openly expressed sympathy for the plight of Nazism’s most prominent group of victims?

As suggested above, there are quite a number of issues to be discussed with regard to Dr. McKale’s treatment of his subject, but in the interest of managing the length of this review, it is prudent to confine our further remarks to one of the more important of those issues.

The problem of anti-Semitism is one that must be considered when one undertakes any study of Nazism. Nevertheless, the treatment of anti-Semitism in Nazis After Hitler simply detracts from the book’s other strengths. It is a regrettable fact that anti-Semitism has been an aspect of the human condition for century upon century, perhaps for as long as history has been recorded. Like racial prejudices between black people and white people, it is not going to go away.

Professor McKale expresses the view that “the victims of the Holocaust” were “the nearly six million European Jews” who were murdered in it. This is not a true statement, since it excludes from the Holocaust the millions of non-Jews who were also murdered.

No one owns the Holocaust. Professor McKale expresses the notion that those who deny the Holocaust thereby deny that Israel has the right to exist. There is no logic in this argument—the two things are unrelated.