Navy SEALs: The Combat History of the Deadliest Warriors on the Planet 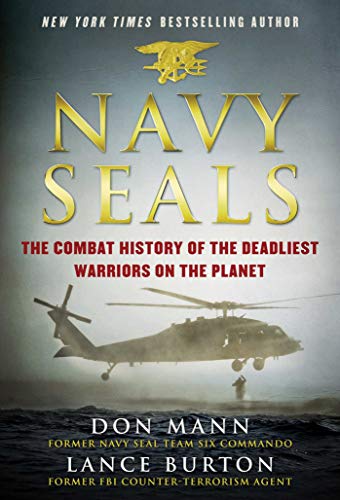 “an engaging overview of these highly trained warriors.”

The U.S. Navy created special warfare units during World War II and since then, Navy frogmen have created a storied legend of their exploits in all of our nation’s military actions for the last 75 years. This new book brings to life many of these heroic actions and more as it attempts to tell the stories of these brave sailors.  While it bills itself as the history of the Navy SEALs, it might be better described as a collection of sea stories connected by some history and vignettes about what it takes to become a member of this elite group.

During World War II, the need in both the European and Pacific Theaters for a continuous series of amphibious landings by Allied forces led to the creation of the Navy’s first special warfare units, which specialized in the new fields of beach survey and hydrographic reconnaissance, later adding the more hazardous duty of underwater demolition of beach defensive obstacles to allow landing craft to deliver their troops safely.

The book does a good job describing the genesis of these teams, and the now legendary founders of the Navy’s frogmen, Lieutenant Commander Draper Kaufman and Commander Phil Bucklew. The rigorous training of these early volunteers has carried through to today, with an emphasis on teamwork and endurance.

As the book relates, these units often suffered horrendous casualties, with the units assigned to D-Day’s Omaha beach suffering over 50% casualties for the men sent with the first landing waves.

The book then steps through the evolution of these units through the Cold War, especially the creation of the current Sea, Air, Land (SEAL) team concept created by President Kennedy in 1962 as the conflict in Vietnam was heating up. SEALs fought throughout South Vietnam and its neighboring countries, even conducting a number of dangerous clandestine missions during the war into North Vietnam itself. Retained after the war, SEALs played critical roles in the two major American military operations of the 1980s—the invasion of Grenada and the ouster of Panamanian dictator Manuel Noriega. Both of these missions are not well known, but each involved heavy casualties for the small teams involved, and in both cases the SEAL platoons had to improvise their way to victory when their original plans went awry.

Strangely, the book has almost no discussion of the SEAL teams during the Persian Gulf war, skipping to the SEALs small involvement in the fighting in Somalia during the Battle of Mogadishu immortalized in the book Black Hawk Down.

However, once the book gets to September 11, the authors really hit their stride. SEAL teams have been in nearly continuous combat for over 15 years, and the book provides some of the best tales of these missions, not only in Iraq and Afghanistan, but other regions of the world, particularly Somalia, where the SEALs conducted a highly risky operations in 2012 to free two Westerners from hostile tribal militias. The authors then conclude with a short history of the Naval Special Warfare Development Group, commonly referred to as SEAL Team Six, the team that conducted the 2011 raid against Osama Bin Laden.

The appendices provide an overview of the SEAL selection process for any reader interested in how the Navy selects candidates for this rigorous training, but the more interesting appendix provides the details on the six SEALs that have earned the Congressional Medal of Honor, America’s highest military award—three from Vietnam and three awarded since 9/11.

Written for a general audience, the book is an engaging overview of these highly trained warriors. Long on tales of heroism, but rather short on many historical details, it provides a basic introduction to the Navy’s Special Warfare community.