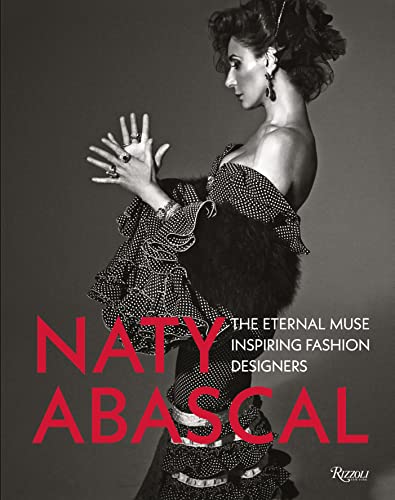 Naty Abascal: The Eternal Muse flings open the closet doors of Señora Abascal that contains treasures from the ’60s thru the present time and designed by everyone from Azzedine to Zuhair.

There is no denying that the Duchesse di Feria (Naty Abascal) was in the limelight for over two decades whether on the runway or living the high life. It was after her retirement in the mid-70s when she spread her wings as well as her fashion sense and lent her advice and taste as a stylist, friend, muse and journalist.

Naty Abascal: The Eternal Muse offers the reader a rare look at not only the contents of Naty’s closets but also of an unerring taste level that does not radiate from one specific point of view. She is always flawlessly turned out whether in the slickest and simplest of tailleurs or the most outrageous feathered and beaded couture pieces. Much of what is seen here might jar the reader’s memory in terms of which designer created what and when they came about. Naty was/is a hoarder of sorts but in the most discerning of ways.

This chronicle starts with her discovery by Richard Avedon in New York City and takes you right up through current times. The featured pieces are timeless and jaw dropping in many cases but the majority is a profusion of Valentino and Oscar along with a smattering of many other designers.

Naty Abascal: The Eternal Muse serves as a catalog for a show at the Museo Jumex, Mexico City, which took place from November of 2019 through January of 2020. The images, which feature an assemblage of dresses, are not as effective as the single images that give the reader an idea of the incredible workmanship and design that these designers added to Naty’s wardrobe. The collective images are superbly and dramatically styled all by the hand of Naty herself!

If her name and fame are unknown to you then this is certainly a great primer demonstrating the making of a fashion icon. Good taste is not learned or taught; it is innate and honed by its possessor. Even an astute and well-read fashionphile will find Naty Abascal: The Eternal Muse enlightening.