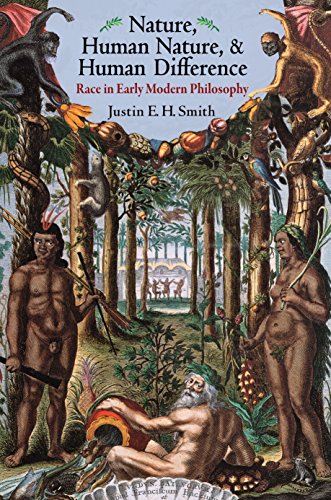 Race remains the predominant discourse of modern life. When nine black men and women studying the bible are slaughtered in a Charleston church by a white terrorist motivated only by racial hatred, the sadness in the human spirit is overwhelming. How can we countenance such racially motivated lunacy in a modern society rich with economic success? In the Charleston case, justice will eventually be served, but we must question why, at this point in our civilized development, race even plays a motivating role.

Perhaps the answer lies deep in our ancestry when philosophers sought to identify the sources of racial identity and the resulting societal discord. This is the project undertaken by Professor Justin E. H. Smith of the Université Paris Diderot in this new book. He is not looking to uncover previously hidden answers, but rather to raise new questions using philosophic and natural science texts hundreds of years old. He produces a dense tract, filled with the jargon common to his field and fully annotated for any who would want to further trace this ancestry.

The manuscript provides a rich context for theory that the reader will find remarkable. Throughout the book, Smith demonstrates his fluency in the body of philosophic literature and analysis. For those outside the discipline, intrusion can be problematic, but one can sense the importance of the book without fully grasping every nuance in this complex work.

Smith did not write a book that will receive high marks for accessibility. Most academics with some experience in the ways of philosophy, however, will find his work thoughtful and illuminating. He offers no new answers for the human tragedy wrought by those who find skin pigmentation an irresistible catalyst for the subordination of others. His work does offer some solace that contemporary racism has been the subject of great thinkers throughout the modern era. We conceptualize race as a social construct even as we proclaim our commitment to societal diversity.

Particularly interesting is Smith’s discussion of those who conceived of the polygenetic origin of persons of different races and the relationship between racial categories and “the order of nature.” Theorists of the time Smith examines reasoned that people who looked different must have had a different source or origin, as do lesser animals, at a different time and place. They have different “natures.”

It would be hard to grasp egalitarianism as a controlling principle for people who were not the product of the same creative root. Only persons of the same origin can sign the social contract. He attributes to the effort to survey human diversity —“ethno-prospecting”—as changing the way European thinkers conceptualized racial differences, using the diverse natural world as their model.

Modern globalization and the heterogeneity of modern western society, combined at times with diminished racial animosity in some communities, has offered a new and unprecedented context leading to possible alteration in the basic and fundamental groupings needed to nurture racism.

The greatest fear of the arch-racists—miscegenation—is in the process of happening, at least in America. A recent Pew study reports that, by 2008, 14.6% of all new marriages in the United States were between spouses of a different race or ethnicity from one another. Offspring of mixed race marriages will be children of all races.

Today’s cohort more than doubles the incident of interracial marriages since 1980. More than a third of adults now have a family member who is married to someone of a different race. As a result, racial stereotyping will become increasingly difficult because skin color will increasingly be of varied shades. If the trend continues—and there is no reason to suggest it will not—the nation’s population will increasingly reflect this new reality.

Racism has always been the product of dysfunctional categorization, as Professor Smith’s book clearly establishes. The modern philosophy of race that he explores so well will wither away as did phrenology, eugenics, and other pseudo-sciences. Only the ghosts of xenophobia will remain.