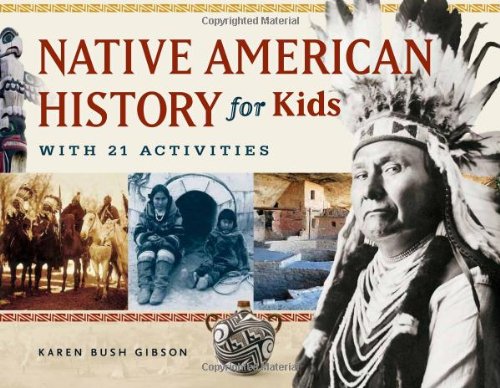 Native American History for Kids is a reliable resource for students, helping them understand more about the indigenous peoples of our continent as well as of those around the world. The text covers historical studies that include music, oral traditions, art, language, customs, and the effects of white culture and assimilation.

Native Americans have remained strong despite the hardships they have endured through our nation’s history, in which European explorers have staked claims in a race to explore, discover, govern, and conquer them. This book offers an honest and straightforward glimpse into the ethno-histories of multiple Native American tribes, and how these tribes were affected by the exploration of “new” lands by European explorers.

The timeline included in Native American History for Kids provides a great introduction because it demonstrates that human history is thousands of years old. As the first chapter unfolds, it becomes clear that the precise origins of human life have not been completely discovered.

The book then goes on to give an effective overview of widely known events in American history, including the westward expansion of the 13 colonies. It also explores the perspectives of Native American history that are not as well known nor understood, including the information behind some of the famous people and events, including John Smith and Pocahontas, the search for El Dorado, and the 1775 Revolt at Mission San Diego. Readers also learn more details about the roles of Native Americans in the Civil War, the Indian Wars, World Wars I and II, and the more recent occupations of Alcatraz Island and Wounded Knee in the early 1970s.

In addition to providing historical facts, this book is appealing for students because it also discusses some of today’s active Native Americans, such as Maria Tallchief, John Herrington, and Sherman Alexie—all of whom contribute to a rich history in need of telling. Other valuable resources in this book also include a glossary of terms, a list of technology-based resources for research in Native American history, and a compendium of other books to read.

Due to the sacredness of many Native American traditions, finding authentic activities for young readers and presenting them appropriately to tie in to native traditions likely proved difficult for the author. One activity offered in the book, “It’s Tool Time,” was very general. Without a clear attempt to connect this activity to its subject, it fits better in a book about the study of early man. Discussion questions for critical thinking also would have more clearly tied this activity to the book’s content.