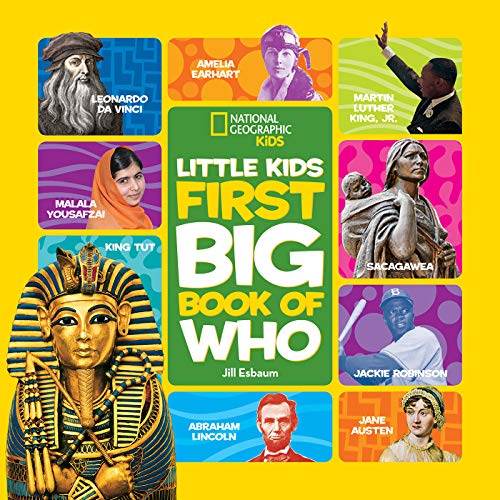 The inside the cover presents a two-page photo spread of Jackie Robinson fielding a grounder. Next is a two-page spread of the Beatle’s midleap (from the album cover of Twist and Shout). The table of contents includes insets of Einstein, Magellan, Baryshnikov, Wangari Maathi (an environmental and political activist), and Michelangelo’s “Pieta”.

Persons of note are grouped by chronology and ability, including scientists, inventors, explorers, artists, politicians, and human rights leaders. The mix is broad and deep, not solely North American and European but also including notables from Africa and Asia. As part of the biographies are photos, illustrations, and subject matter of a wide variety of topics including archaeology, art, architecture, furniture, coins stamps, medical instruments, politics, and the environment.

A lot of effort went into National Geographic Little Kids First Big Book of Who to make it beautiful, to make it relevant, and to make it something a child would want to read (or be read to) multiple times. Every entry is more than a biography; for example, King Tut is used to introduce Howard Carter, the archeologist who discovered Tut’s sarcophagus. The reader is presented with not only with Carter’s biography but also with a map and ancient Egyptian history.

In structure, headlining notables are dedicated four pages, while the less famous are packed four to a page, introduced by “meet more . . .”, as in “meet more explorers” and “meet more artists.”

In regards to reading comprehension, younger audiences will most likely need to be able to read. The Little Kids First Big Book of Who uses an adult vocabulary, and there are phonetic spellings only for words that may be unfamiliar to adults.

This reviewer was unfamiliar with a number of the individuals, these three for example: Elizabeth Blackwell, Isabella Bird, and Matthew Henson. The first two are (Egads! What is this world coming to?) women, while Matthew Henson who traveled with Robert Peary and reached the North Pole before Peary, never got credit for his achievement until recently; he was left out of his era’s history books because of the color of his skin.

For any list of notables, it is only human nature to wonder why is this person included and not that person, and why is this person a headliner and that person relegated to second tier? And this reviewer is no different. For example, why is Ella Fitzgerald present but there’s no mention of Billy Holiday? Why does Amelia Earhart merit four pages while Charles Lindberg, who arguably did something more important, is limited to a quarter page?

A note for adults: This reviewer must point out that only “wholesome” notables have entries, presumably to reduce questions and not give your child night terrors. For example, Golda Meir rates four pages but Hitler merits no mention. The first female president of Chile, Michelle Bachelet also rates four pages but Chile’s nemesis, General Pinochet merits no mention. And though a number of notables were assassinated, Lincoln, Gandhi, Martin Luther King Jr., and John Lennon among them, nowhere will a child find mention of the risks a political or human rights notable runs for being notable. Consider too, the cost of entry to the list of human rights leaders who through luck avoided assassination: Nelson Mandela (imprisoned for 27 years), Harriet Tubman (escaped slave), Tenzen Gyatso (exiled), and Malala Yousafzai (shot in the face).

An incredible amount of effort went into the construction of Little Kids First Big Book of Who from the quality of the paper to the quality of the photos and illustrations, to the care that went into the selection of individuals and their accompanying biographies. National Geographic Little Kids First Big Book of Who provides a glossary, an index, a further reading section, and tips for parents as well.

This review barely addresses a tenth of what a child may find of interest between the covers of Little Kids First Big Book of Who.