A Nation of Deadbeats: An Uncommon History of America's Financial Disasters 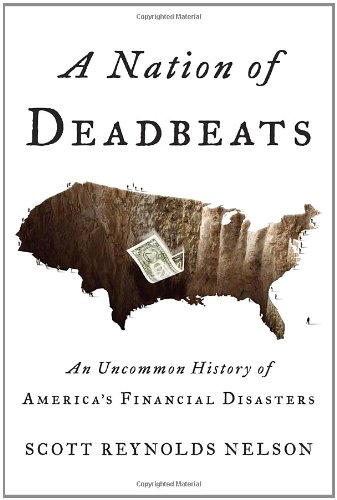 A Nation of Deadbeats belongs to a peculiar American genre, one that you might call “Tales from . . .” There used to be a series called “Tales from History,” which cherry-picked the exciting stories from every epoch and served them up in scrumptious, digestible nuggets. It was good, memorable reading.

Author Scott Reynolds Nelson has done much the same thing here. So we switch analogies: He has painstakingly extracted the sensational details from the mucky ore of the history of financial crises in the U.S., welding them together in an exceptionally readable form.

A Nation of Deadbeats performs a great service in that most of us don’t learn about this side of American history when we study it. The book also puts recent banking history—one that most of us have been pretty concerned about—in perspective, showing how modern banking evolved.

If, as a certain newspaper likes to remind us, we live “in financial times,” then Mr. Nelson’s book helps us to understand how we got here.

There is a certain amount of worry in A Nation of Deadbeats about whether or not these events actually “history.” Mr. Nelson need not have worried.

A look at the book’s notes shows that all of the source material used, except for two instances, was in English. You don’t do history in one language anymore, and had the author looked at the French and German and Japanese historians (just to pick a few alternatives), he might have found approaches that would have resolved some of the methodological dilemmas that, in his insularity, he found challenging.

At times the lack of other sources is simply embarrassing: Discussing a panic in 19th century Russia, Mr. Nelson’s only sources are the London Times and the French novelist Victor Hugo (in translation!). Surely somebody in Russia noticed this hole, too.

But with the academic question of its historical merits set aside, A Nation of Deadbeats has some interesting tales to tell and does so in that journalism-lite style of no big words, making it pleasantly readable.

Author Nelson shows first how the American Revolution was financed and the role of speculation—all of which led up to the founding of the Bank of the United States.

Then he describes how in 1792 excessive speculation created a bank panic leading to hoarding currency, a plunge in the value of bank stocks, and skyrocketing interest rates.

Writing of the panic, a contemporary said: “A general horror has occasioned . . . torpor and indecision among the dealers in stock . . . the fulfillment of individual engagements is not only suspended, but public and private confidence has received such a blow as may eventually stagger the stability of the government.”

In what must have been the first exercise in quantitative easing, Alexander Hamilton acted to raise the value of U.S. bonds by having the federal government buy them up.

Mr. Nelson traces the story through the 19th century, when the Bank made money lending to the British during its war against the French, and when President Thomas Jefferson stopped it—closing the bank—he started the War of 1812.

The next panic comes in 1819, after a second Bank of the United States had been established, and the efforts of its new director to discipline both the western branches of the bank, and the activities of the so-called “caterpillar” banks throughout the nation unleashed a financial storm. But it was storm preceded by frenzied speculation on land and on goods . . . and again we are on familiar territory. . . .

The book goes on to trace the rise of speculation before and through the Civil War, each time followed by a drop in commodities prices, then by mortgage failures, then by bank failures. Then the national debt became an issue. . . .

Mr. Nelson is particularly good on showing how American party politics usually failed to respond well to the crises, very often coming up with solutions with no real relationship to the problem.

We remember, from our American history course, William Jennings Bryan and his “crucifixion on a cross of gold”—his insistence on the abandonment of the gold standard—which had little relevance to the economic problems of the U.S. in the 19th century. But the Democratic Party’s “soft money” position won lots of votes. Mr. Nelson has many less well-known examples of this same kind of thinking.

Readers will have to decide for themselves whether A Nation of Deadbeats brief but pithy account of our most recent financial crisis holds water. Though lacking breadth, it is certainly one valid position among many others.

Considering the several hundred books of this nature I’ve read that are utterly useless, A Nation of Deadbeats is well worth reading—particularly as it is larded with entertaining characters and powerful citations.

As the great and largely forgotten early 20th century journalist H. L. Mencken said regarding two presidents: “Harding, confronting public problems of grave importance, met them like an idiot, but Hoover has met them like two idiots.”