Nation on the Take: How Big Money Corrupts Our Democracy and What We Can Do About It 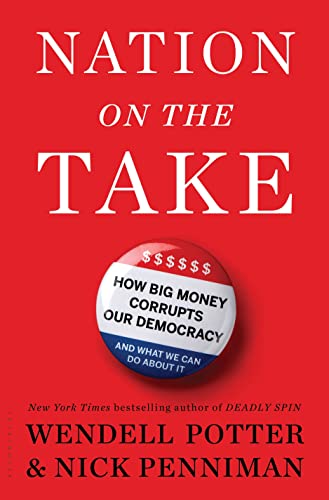 “no less than a clarion call to the American people to rise up and release these ties that bind.”

Nation on the Take: How Big Money Corrupts Our Democracy and What We Can Do About It could not be timelier, with the cacophony of the presidential elections in full swing. The duo of Potter and Penniman provide valuable insight to inform our participation.

The book is a meteoric take on the imbalance of power and money in the oligopoly of the United States. Covering the gamut from lobbyist abuses and skewed Congressional representation in healthcare, energy, and farm subsidies, Penniman and Potter make this a required read. Artfully this daring duo reveal how big money influences not only the national elections, but even school board ones. Citizens may still have a vote in the elections in this country, but Nation on the Take makes one wonder if we truly have a say in how the country is run.

For example, the Koch Industries donor network spent $500 million on the 2012 presidential election, which was more than the entire Republican National Committee. This kind of green demands attention, and erstwhile Congressman have to spend more and more of their time fundraising, rather than doing the actual work for their constituents. Not to worry, private lobbyists of big pharma, giant agriculture conglomerates, and the oil and gas industry will write the bills for Congress, assuring they get what they want at the expense of the American people.

The level of cynicism is on the rise in the United States, and no wonder when election outcomes, environmental policy, and lucrative tax breaks are controlled by a scion of the uber rich. If it isn’t enough that the top 1% control 20% of all the wealth in the country, they also decide how dirty your air is, how polluted your water may be, and how much money goes to their special interests and not yours. Nation on the Take lays bare the greed of corporations and ultra-rich individuals whose sense of entitlement disregards basic needs and dignity for the working class (most of us).

Whether you are playing the “Trump card” or if you are “feeling the Bern” this book reveals the direct actions and behind the scenes machinations which impact the quality and the length of your life. But fear not, Monsieurs Potter and Penniman provide easy to understand suggestions on how to improve this societal morass. Their thoughtful ideas include restoration of the Tillman Act, which prevented corporations from contributing directly to political campaigns. And of course reversing Citizens United, which held that money is a form of speech and thus there are no limits on what money can buy electorally. Justice Scalia, though you are pushing up daisies now, you were totally wrong on this one. A cap on campaign spending does not violate free speech. As revealed in the book, at the present moment, federal contractors aren’t even required to disclose their political activities. Does anybody remember how Haliburton profited from the Iraq war?

Heretofore one thought of dark money as dealing with Mexican drug lords or at least military for hire, but lo and behold, our government, through an Act of Congress (thanks for nothing) has allowed a special designation for these behind-the-scenes-shenanigans to flower under the 501 C-4 criteria. This ruling has allowed super PACs or political action committees to flourish, and they are not required to disclose where their money comes from. This hardly seems right when all American tax payers are required to disclose all of their income to the Internal Revenue Service, so why should these groups get an exception? President Obama could sign an executive order requiring all federal contractors to disclose their political spending, but despite repeated pleas from Common Cause and other advocacy groups, this has not occurred.

Nation on the Take is breathtaking in the level of detail for Washington K Street transgressions and the national landscape of politics and money. If you are still on the sidelines for your personal campaign to restore our democracy, this book will incite a riot in your conscience and illustrate some things we as a people can do to take back our country. This book is no less than a clarion call to the American people to rise up and release these ties that bind.