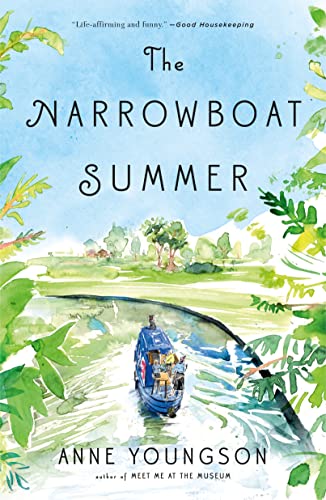 Just as delightful as Youngson’s Meet Me at the Museum, The Narrowboat Summer takes its characters and readers on a journey of the body and mind. By the time the trip through the canals is over, the book’s cast of misfits and outcasts become beloved friends whom the reader will not soon forget.

Eve, Sally, and Anastasia have nothing in common. They did not grow up in the same kind of households, nor do they live similar adult lives. They don’t like the same books or the same kinds of people or the same types of pets. In fact, they don’t even know each other. Until they do.

A chance meeting, orchestrated unknowingly by a very independent dog brings the women together when they all need each other the most. Eve has just lost her demanding and all-encompassing job. Sally has left her mentally absent husband. Anastasia has been given a life-altering diagnosis. All three women are at a crossroads, but the summer is just beginning, and a three-month adventure awaits.

When Eve and Sally agree—agree being a loose term for the arrangement they find themselves in—to take Anastasia’s narrowboat through the canals of England, they know nothing about boats or canals. They have no idea what they will do when they return or how their friends and families will react to this spontaneous venture. What they do know is that Anastasia is a formidable soul, one difficult to say no to, who is in need; and they are two women with time on their hands and hearts open to whatever comes.

The Narrowboat Summer is a story about a journey through the twisting, turning canals of England as well as a journey through the twisting, turning phases of life. Eve discovers her softer side while, at the same time, discovers hidden strengths and ambitions. Sally finds an independence she never thought she possessed or even desired. Together, they form a bond of friendship that extends beyond the deck of the Number One, Anastasia’s vessel, and includes a palette of colorful characters who flow in and out of the landscape of the rivers and small towns along the way.

Arthur is an enigma, showing up when and where he pleases and making himself at home aboard the Number One. There’s more to the man than meets the eye, but he’s a closed book that Eve and Sally long to crack open. Billy and Trompette, young lovers paddling a boat of their own, add both charm and tension with their story time gatherings and illicit drug dealings. Owen, the shop owner who awaits the Number One, is no more than an impatient voice on the phone until he stumbles into their lives in an unexpected way.

Tying everyone together is Anastasia, a fiercely independent older woman with a sharp tongue and a regal command. These people along the canals have floated in and out of her life in much the same way that the boats float along the river. Once they meet and get to know Anastasia and her way of life, it’s hard to say goodbye. Those closest to her admire her tough exterior but come to know the soft interior of a woman with a good heart who is just trying to live as best she can in a world that has moved far beyond the canals and the narrowboats that glide through them.

The things Eve and Sally discover about this world and about themselves form the basis of the novel. The reader often forgets that this tale takes place in the modern-day world. Life on the canals seems far away in place and time. Phones are used and Kindles are read, but the daily operating of the boats is done through sheer muscle and often-malfunctioning engines.

Eve and Sally have the opportunity to experience a life that barely exists outside of literature or the far reaches of the earth’s mountains and plains. The interjection of cities and towns to which they go for food, news, and communication forces them, and the reader, to acknowledge that time is not standing still, the world progresses for better or worse, and days of leisure, even in the midst of the hard-work and constant vigilance aboard the boat, can be found if one but seeks them.

Readers should be aware that the book is, at times, confusing in the back-and-forth points of view. It’s sometimes difficult to remember or surmise if it is Eve or Sally on whom the tale is focusing. Nonetheless, the interesting characters and idyllic backdrop of a summer aboard a narrowboat call to mind those other two river-bound, unlikely friends of literary fame. Eve is the resourceful, responsible Jim to Sally’s impulsive, loveable Huck.

At the end of the journey, Eve and Sally have many decisions to make about their futures. The beauty of all they learned over their narrowboat summer is that the journey is always just beginning.