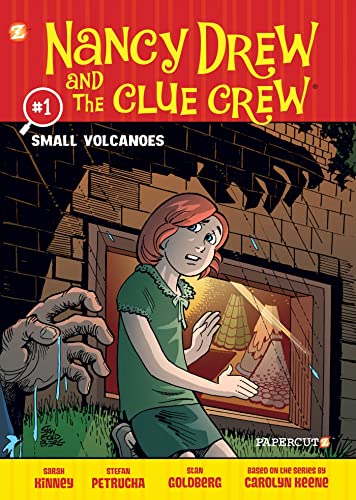 “Papercutz has added a significant new dimension to the legend of Nancy Drew. She and her new Clue Crew should be around for a long time.”

Her iconic status as a role model for young women has never totally diminished. Through various incarnations Nancy Drew has stayed mostly current with generation after generation. The adaptability of the concept of such an accomplished detective has proved one of her greatest strengths. Today Papercutz expands on the idea of Nancy Drew by introducing a new version of the heroine.

They have created a new series that brings the age of Nancy Drew down to eight years old. This opens up an entire new world of stories, ones filled with more wonder, amazement, and the heightened thrill of being a child in a world filled with surprise after surprise, discovery after discovery.

The traditional template of Nancy Drew is intact. Her friends George, Bess, and Ned are all still on board—although Ned’s role has been redefined from college level boyfriend to a slightly ditzy eight-year-old boy with a crush. And this is a crush Nancy is totally oblivious about.

The new Nancy Drew and the Clue Crew is the perfect series for a mother (or father) who once enjoyed the stories to bring their daughter (or son) into the world of Nancy Drew. No prior knowledge of the characters is needed.

What writers Sarah Kinney and Stefan Petrucha have created is a school-based world where the kids are treated (for the most part) as responsible young adults. The adults themselves are strong role models who recognize the importance of leaving a kid to discover their way in life, but are never far away when there is a problem.

As the kids prepare a science project, Nancy’s instinct for a mystery begins to take shape as the school’s science projects go missing. It is Nancy and her Clue Crew who must come through for the school.

Built inside the plotline are multiple story arcs that cover science, the current media, and the nature of friendship. Ms. Kinney and Mr. Petrucha never allow a stray element to overtake the story. The writers move the story along at a natural pace that never overwhelms the reader.

The graphic novel is illustrated by veteran Stan Goldberg. His career began in 1949 at age 16 when he was a staff colorist for Timely Comics, the company that eventually became Marvel Comics. Along the way he worked on some of the most popular characters of the 1960s including Spider-Man, The Fantastic Four, The X-Men, and The Hulk.

In the 1990s he gained notoriety for drawing the Riverdale characters for the wildly popular Archie Meets the Punisher crossover between Archie and Marvel. He works as an artist for Archie Comics to this day. His experience on the Archie titles grounds the new Nancy Drew series in a very familiar world. At times the slapstick rings of Jughead or Moose, and it is impossible to see such a cleanly drawn school setting, such as the one Mr. Goldberg has created here, without thinking of Riverdale High.

This is not to say his work is not original, it’s more that he keeps the graphic novel firmly rooted in the world of familiar comic illustration while never loosing the joy of the story. The way he works in such an easy and effortless way also provides a very quiet attraction to a new reader. He is showing kids how to read a comic.

The harmonious nature of the story and relationships are part of the overall appeal. The series is designed to bring readers into the world of Nancy Drew and it succeeds on every level. For those who find her for the first time they are taking the first step in a life long relationship with a complex character who has an amazing back story to discover.

Her origins date back to 1930. When writer and syndicate owner Edward Stratemeyer first released The Hardy Boys series in 1927 he quickly became aware that the series, originally thought to be for young men only, had a solid female readership. Not one to miss a buck, he created outlines and suggestions for a new female character that he submitted to his publishers.

Settling on the name Nancy Drew, the series was an immediate hit. As he did with The Hardy Boys, Stratemeyer—using the pen name of Carolyn Keene—continued to create outlines and farm out the writing to more experienced professionals. The girl detective began her career as a 16-year-old girl who lived for mysteries.

The concept has proved to be highly adaptable as Nancy went on to rival any other skilled detective in fiction, while the Nancy Drew titles share a similar development that of the Classics Illustrated titles: Over time both series needed revising and editing according to the mores and standards of a more modern time.

Today Papercutz has added a significant new dimension to the legend of Nancy Drew. She and her new Clue Crew should be around for a long time.