The Nameless Ones: A Thriller (19) (Charlie Parker) 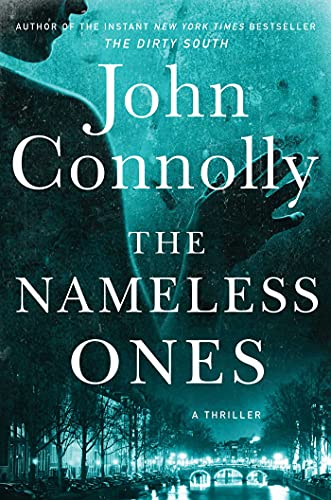 “One of Connolly’s writing assets is his ability to end each chapter with a short sentence that drives the reader to turn the page and not put the book down.”

Grim and grisly—the two best words that describe John Connolly’s newest thriller, The Nameless Ones. But don’t let that force you to set the book back on the shelf because it is a definite keeper.

Connolly takes two of his ongoing characters, Louis and Angel, considered career criminals who frequently do the bidding of the United States government, and sets them on a path of revenge. When their acquaintance and friend, De Jaager, is brutally murdered along with his sister-in-law, Anouk and a young woman, Liesl, the next stage begins with Louis forging ahead.

But the revenge starts much earlier than these three murders when De Jaager is connected with the death of a Serb, Andrej Buha, and yet another earlier death occurs—that of federal legat, Armitage. Armitage had established a relationship with the Serbian criminal brothers, Radovan and Siridon Vuksan, distant cousins to Buha, and judged to be “very bad people.” They are responsible for De Jaager’s death.

And Louis is now on their trail. Once the search for the Vuksans and their cohorts in crime begins, Connolly introduces a cadre of characters, some of whom are hard to keep up with, but each of whom plays a vital role in moving the story of revenge forward.

One of Connolly’s writing assets is his ability to end each chapter with a short sentence that drives the reader to turn the page and not put the book down.

Any fans of Connolly know that his stories frequently have a tinge of the paranormal woven into them and The Nameless Ones is no different. The unusual character of Zorya, an ageless entity, neither young nor old, enters the story as a vlach, or a Serbian witch. She sees the future—that of the Vuksans as well as her own, and it does not look good for any of them. She meets Jennifer Parker, the dead daughter of Charlie Parker, a cohort of Louis and Angel. Jennifer protects her father and that does not bode well for Zorya or the Vuksans.

Are we confused yet? Well, stay with it because all of the loose ends, the multitude of characters, and the quickly changing scenes will start to come together and tie up nicely at the end.

Connolly is good at rolling these balls of yarn around the story, introducing new characters and situations that emerge, at time helping Louis, at other times hindering him, as he (and to some degree Angel) knits together every event that draws him closer to achieving his goal—the demise of the Vuksans and their team of Serbian gangsters.

If there is any drawback to the story, it is the massive number of characters and the foreign names that Connolly develops through an extensive narrative history of each one. While most of the backstory is well-spent designing who each character is and how they fit into the grand scheme of things, it should be noted that there are places where some of this background could be eliminated. Having said that, it should also be noted that the pictures that evolve from this information go a long way to moving the story forward.

Connolly fans will not be disappointed, and The Nameless Ones will only feed their desire for the next Connolly thriller.