Myth America: Historians Take on the Biggest Legends and Lies About Our Past 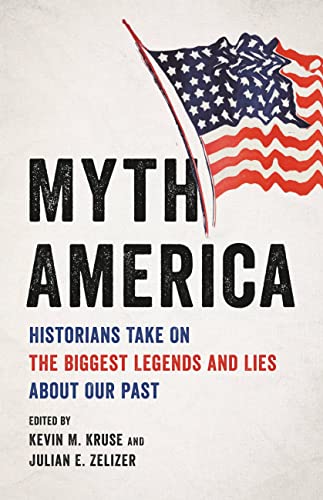 The clash over history is heating up as pundits and politicians across the political spectrum seek to shape and interpret history to suit their purposes and narrative. While the facts of history may not be disputed, the ensuing interpretation of causality and impact of certain historical events and figures is always subject to the changing mores of the time and worldviews of historians.

In this book, a group of progressive historians seeks to correct what they deem the distortion of America’s past by conservative pundits and historians. In a series of essays, these historians cover a wide range of topics, seeking to correct what they consider the misguided myths of America’s past. The editors make clear their viewpoint that history has been deliberately distorted by what they consider “conservative” media and historians, and they dive into contemporary politics by immediately labeling conservative interpretations “disinformation” while they profess to want an honest debate about our country’s past. Their challenge to achieving this goal lies in the unevenness of the essays, with some offering thoughtful discussion while others quickly devolve into essentially partisan political dissertations.

The essay on the creation of the Constitution is another excellent work by Professor Akhil Amar, examining the creation of the Constitution, the Federalist Papers, and the always contentious topic of whether secession was considered legal by the Founding Fathers. This essay admirably combines history and legal arguments to actually change some myths about the most important document in our country’s history with a straightforward and engaging approach that does indeed correct the record on the role of George Washington and which of the Federalist Papers is really critical to understanding the Founders’ intent. While Professor Amar does not shrink from controversial topics, he addresses them in a straightforward manner with no hyperbole.

The essays on the New Deal and Great Society are also well done and make solid arguments from both an economic and political viewpoint that these programs, always controversial with conservative commentators and historians, were more impactful and enduring than given credit. While the essay on the New Deal is unlikely to dampen questions about the effectiveness of the numerous programs it initiated, or whether it really took the buildup prior to World War II to end the Great Depression, the author does make a convincing case that FDR’s programs certainly started the United States on the road to recovery far better than other countries, and prevented the kind of extremism that swept Germany. The Great Society and its social programs will likely continue to generate controversy as well, but as the author notes, the continuing popularity of Medicare and Medicaid, two of the showpieces of LBJ’s program, speaks for their political acceptance, if not economic benefit, to American society.

Several of the other essays are a little more controversial, but nonetheless offer compelling alternate viewpoints on such topics as the feminist movement, the Reagan presidency, and the so-called southern strategy which caused a geographic shift in the regional strongholds of the Republican and Democratic Parties. While they may not shift reader’s viewpoints, they will generate thoughtful consideration.

However, some of the other essays read more like extended editorials one would find in The Atlantic or Salon. While they profess to make corrections to the historical record, they quickly devolve into nearly ad hominem attacks on conservatives, Republicans, and especially Donald Trump. A careful reader cannot help but notice that the topics chosen have an inescapable political slant, and the authors of topics titled “White Backlash,” “Insurrection,” and “Voter Fraud,” almost seem to be using history as a cudgel to score political points.

While each essay has a comprehensive set of end notes to show the amount of research conducted, the slant of these essays can be a little severe. If the author’s intent is to sway those same conservatives discussed in the book’s introduction, one fails to see how these essays will meet that goal with their deliberately confrontational style.

Interpreting America’s past is always controversial, with each generation determined to reinterpret historical figures and actions through their own experiences and current social mores. This book would definitely be a testament to that mode of revisionist history. One of the fundamental questions for any reader of American history remains: “Is America a country built on the notion of liberty and justice for all, even if the journey has been uneven and sometimes halting?” or “Is American a country built on the fundamental notion of structural racism, inequity, and injustice?” How they choose their underlying view of America’s past will always drive someone’s interpretation of our history.  While this book seeks to persuade and correct what the authors think is a deliberate distortion of our past, it is ultimately up to the reader to determine how well the editors and authors meet their goal.