My Year Abroad: A Novel 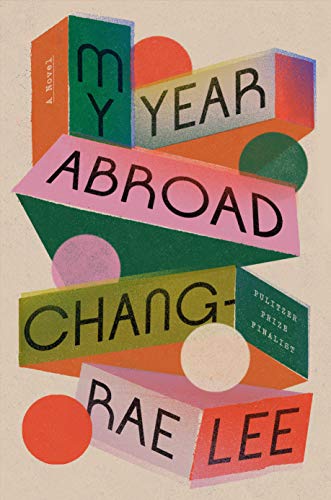 In this latest novel by Chang-rae Lee, author of the riveting and sublime A Native Speaker and A Gesture Life, we see Tiller, a slacker-millennial, a college student who has moved in with a cougar, a 30-something single mom, Val. Together they are raising a chubby eight-year-old son, Victor Jr. aka Veej, with a genius for creating gourmet dishes.  Tiller is also a "hapa"—half-Korean, half-white guy wanting something adventurous in his pedestrian life. Having very low self-esteem, Tiller is first and foremost searching for validation.

Under witness protection due to Val's ex-husband being a minor thug, Tiller, Val, and Victor Jr. have moved to a town that could be in Appalachia: Stagno, which has lost any employers it may have once had, leaving everyone stagnating. Tiller, despite his love for Val and his interest in the little boy, is also stagnating.

Along comes a charismatic, extremely wealthy Chinese American businessman, Pong Lou, who decides when they meet in a bar not only to mentor Tiller, but also to treat him to the trip of a lifetime to promote his health drink, Elixerent, for a start-up company he is envisioning. And this is where My Year Abroad gets its title: a rapidly accelerating trip to see a host of characters important for Pong's success, but the characters and the relationships become convoluted and not richly developed.

My Year Abroad is structured into two distinct and very different plots: 1) Tiller's trip throughout China with Pong and his retinue; and 2) his romance with Val and her son. Alternating between the two locales and different dramas, Tiller is always the narrator processing both his adventure and his need for family.

In the portrayal of the character Tiller, there isn't the psychological penetration and skewering of motives found in Chang-rae's other novels. Tiller is lost, mostly from parental abandonment, but the angst and rudderless nature of his quest for meaning in life is not developed during the first half of this narrative. Yes, early on we discover his unfortunate family circumstances, but the secrets and lies—the things unsaid—are not adequately touched upon until the second half. His biracial identity also seems vaguely developed although his trip to Asia and Pong's immigrant experience intertwine.

What results is a little too much going on within each plot without the essential "why" being answered, or at least suggested. Yes, Tiller needs family, but is Pong a father-surrogate and is the venture doomed to fail? Is Val a substitute for a mother figure and the little boy his alter ego? A few parallel scenes from his past—much more unspooled than the shadows given to the reader—are sorely needed.

One can truly appreciate the skill with which Lee writes, but the story doesn’t capture its audience until the last 100 pages (of over 600). Lee's vivid prose is lyrical, bordering on Shakespearean, and a wonder to behold at times. During a sex scene with Nenita in chapter 15, Lee writes: "Do something lovely and filthy to each other, all the better. If only one of us got to climax come or even neither, so that there was no discrete beginning or end to the want and we were acting out the middle of the story, over and over and over. Every notation becoming the pleasure, continually accruing an unending sentence."

Unfortunately, the prose does not reach that climax neatly—lean and clean—and seems like there was no discrete beginning or end, but endless sentences with little momentum moving the action forward until the last section. By that time it is too late—all the drama packed in so tightly, leaving us wondering: Why didn't Lee structure the climax earlier and with more even pacing?