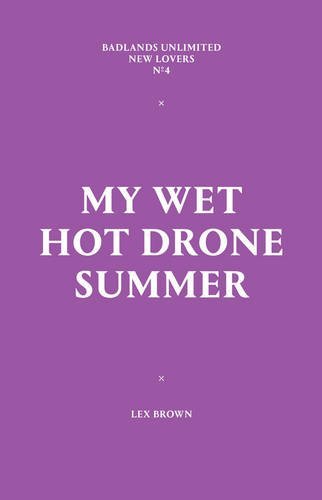 Set in the year 2056, My Wet Hot Drone Summer by Lex Brown follows Mia Garner and her stepbrother on a road trip across the United States.

Mia is a hotshot lawyer who recently dumped her cheating boyfriend. She is working on a class action suit against the mayor of Miami for his attacks on civilians. Her stepbrother Derek is a brilliant computer programmer who has developed new technology to be used in conjunction with domestic drone flights. He plans a meet with Xavier Céron, a mysterious CEO, and sign a contract that will make him and his co-designer, Wes, into millionaires.

In this near future, drones have become utterly integrated into domestic society—no one notices. But technological advancements collide with an encroaching global ecological catastrophe. Mia represents ordinary people in Miami, forced from their homes by rising sea levels. It is amid this catastrophe and a total surveillance culture that Ms. Brown weaves her tale of unbridled lusts, personal greed, and tangled alliances.

Mia struggles to come to terms with her infatuation to her stepbrother. She channels this taboo lust into a raunchy affair with Wes. During their night of lovemaking, Mia feels she is being watched. Not to be outdone, Wes exploits Derek's crush on Mia and seduces him as well. Brown creates a scenario where everyone sleeps with everyone, but come morning, they have to face the consequences.

During her journey, Mia meets Xavier at a cocktail mixer in Los Gatos, California. She also meets Evangeline Christmas, an heiress belonging to the Christ-mart retail chain.

While the target of the satire should be obvious, it also shows Brown not taking the material too seriously. Some giggles are par for the course in a narrative this raunchy and lurid. Like any good grindhouse movie, Wet Hot Drone Summer doesn't take itself too seriously. Nothing would ruin the mood more than an overly serious and dour lecture on all the problems in the world. Mia acts as the conscience of the novel, but she isn't a humorless scold.

Published by Badlands Unlimited, an imprint specializing in both erotica and art books, My Wet Hot Drone Summer aspires toward a literary raunchiness. Not without precedent, Bandlands Unlimited seeks to fill the niche in the erotica market once held by the legendary Olympia Press. Olympia Press, run by Maurice Girodias, printed the infamous Traveller's Companion books. Besides churning out raunchy titles, Olympia was also home to groundbreaking achievements like putting out works by William S. Burroughs, Samuel Beckett, Jean Genet, and other luminaries of the literary canon.

If My Wet Hot Drone Summer is any indication of the quality Badlands Unlimited brings to the literary erotica market, then they are off to a great start. Brown's book does not belong in the same category as Fifty Shades of Grey and its countless imitators. This is socially relevant smut with characters possessing a realism and personal vulnerability. The sex is pure spectacle, but the story's spirit veers closer to the controversial film I Spit on Your Grave.