My Uncle Martin's Words for America: Martin Luther King Jr.'s Niece Tells How He Made a Difference 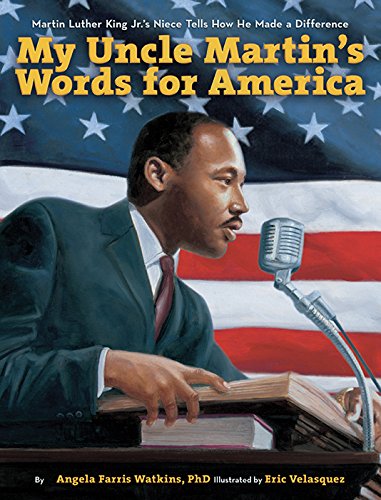 “My Uncle Martin’s Words for America not only honors Dr. King’s legacy but also respects the intellect of young children and the imperative to teach them about pivotal events in this nation’s struggle for justice.”

Explaining the significance of Dr. Martin Luther King Jr.’s life and his impact on history to early readers has just gotten easier with the publication of My Uncle Martin’s Words for America by Angela Farris Watkins.

With iconic scenes from the era as background, the text explains the power of King’s words during major events like the Montgomery bus boycott and the Selma march. The power of Ms. Watkins’ words are matched by bold illustrations showing, for example, African Americans walking to work as an empty bus rolls by, and Dr. King sitting on a cot in a stark jail cell, bent over as he writes the Letter from a Birmingham Jail.

The book is an elementary teacher’s dream tool for simultaneously teaching social studies and language arts. In the back of the book is a glossary and a brief chronology of events from the 1955 bus boycott to the 1965 Voting Rights Act. The timeline is set up to show the impact of Dr. King’s actions on civil rights. There is also a bibliography and a list of other related books for young readers.

The text tackles difficult concepts such as non-violence, which is defined operationally in terms all ages can understand. “Non-violence means you will not use hate, weapons, or harmful words to solve your problems. You will only use love.” The accompanying illustration shows Dr. King gazing at his first-born baby while standing on the front porch of his fire bombed house. The next page shows an angry mob with rifles prepared to fight back but persuaded by Dr. King that love is far more powerful than hate.

The author does not deal with Dr. King’s death and only briefly mentions the “I Have A Dream Speech” in order to focus on Dr. King’s message of brotherhood and other key concepts from the movement. My Uncle Martin’s Words for America brings to mind another great picture book on the movement, Martin’s Big Words by Doreen Rappaport, illustrated by Bryan Collier that was a Caldecott Honor Book in 2001.

My Uncle Martin’s Words for America not only honors Dr. King’s legacy but also respects the intellect of young children and the imperative to teach them about pivotal events in this nation’s struggle for justice.