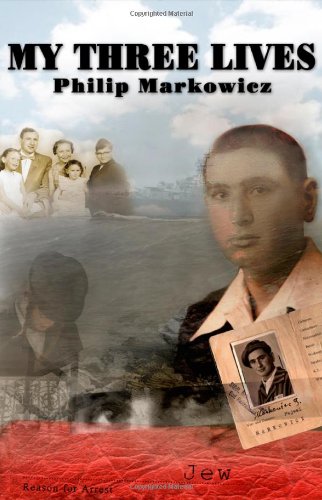 In his Holocaust memoir, My Three Lives, Phillip Markowicz bears witness to the countless innocent lives whose flames were extinguished for their “racial impurity,” as defined by Nazi laws.

His memoir is a testimonial to those who by strength of spirit, conviction, and through kind fate, managed to survive humankind’s worst genocide.

Markowicz adroitly describes the incarceration, starvation, forced labor, degradation, humiliation, and inhuman brutality brought upon his loving family by Nazi Germany. His descriptions are remarkably detailed. Of the nine million Jews trapped within the terror of the Shoah (Holocaust), only three million survived.

Markowicz and his brother Henry were among them. All of their devoted relatives were murdered, died from starvation, or perished from rampant sickness brought on by their brutal incarceration. The first life of Phillip Markowicz was in a beautiful, idyllic existence, with an adoring family and Phillip’s powerful devotion to religious tradition. Phillip was born into the simple life of a Jewish child in a small Polish village. He wanted to become a rabbi like his father. His ancestors carried a remarkable devotion to Judaism as leaders of their religious communities.

As rabbi, his father was responsible for protecting the morality and sacred constructs of a deeply religious Jewish community. Markowicz reveled in the beauty of Torah and his Jewish culture. Enthralled by his religion and its traditions and surrounded by devoted relatives, Markowicz entered adolescence in a perfect world of love, learning, faith, and family. Sadly, just as soon as we become pleasantly familiar with this peaceful village life, it is destroyed by Nazi Germany.

The second life of Phillip Markowicz was as a prisoner of the Third Reich. His family was forced into a ghetto and then to another, more decrepit ghetto. Without heat or food, starvation and sickness became ubiquitous. Death and dead bodies were everywhere. From that ghetto prison, he was sent to a Nazi concentration camp; and then to another camp and then many more, including the infamous Auschwitz.

As a tall and muscular young man, his life was probably spared due to his perceived ability to work hard and long. Prisoners considered too old, weak, or infirm to work were immediately selected for gas chambers. In this life, Markowicz endured the unendurable. Every member of his family, except his brother Henry, died or was murdered.

Together the brothers managed to survive sickness, starvation, forced labor, and vicious brutality. On several occasions, they faced certain death, only to miraculously escape it. Having survived the horror of several Nazi concentration camps, Phillip and Henry were added to a death march just ahead of the Allied armies. Despite incredible odds, and having lost half of their original weight, Phillip and Henry managed to survive.

Shortly after the war, in a displaced persons (DP) camp, Phillip found and married his true love, Ruth—another Jewish Holocaust survivor. Together, they would attempt to rebuild their crushed lives and absent families.

The third life of Markowicz is his peaceful and rewarding life in the United States. There he and Ruth raised three bright and successful children. In this life, filled with vast potential, the Markowicz family thrived and prospered. Phillip and his family settled in Toledo (Ohio), where he founded a television and radio repair business. He soon built it into a successful retail appliance store. Markowicz had finally found peace, happiness and success. Y

et even this breathtaking new life held a terror unforeseen and unimaginable. His younger daughter, Diane, took her own life while at a university in Boston. Even in wondrous happiness, the Markowicz family experienced dreadful despair. The years passed and Markowicz struggled to climb out of his grief. He and Ruth watched their two remaining children become esteemed professionals and raise families of their own. They became grandparents. Eventually, Phillip retired and sold his appliance business. He and his son traveled to Germany and Poland. There, he found only disappointment, ambivalence, and anger.

The beauty of his idyllic childhood exists now only in his memory. Phillip and Ruth escaped the Midwest winters in Florida, where they had many good friends. Eventually, on one such stay in Florida, Ruth died. Once more, Phillip was wrapped in torment and desolation. Time passed and Markowicz found happiness and peace with his children and grandchildren. Eventually, he found a new partner and a loving relationship. Once more, Phillip Markowicz was at peace with the world.

Markowicz is a surprisingly gifted writer. The panorama of feelings and experiences in My Three Lives reads more like a novel than a memoir. Here we find inviting characters and vivid descriptions. There is nothing dry or sluggish about this book. We are quickly immersed within the rich culture of Eastern European Judaism. Just as soon, we are cascaded into the bowels of terror, inflicted by Nazi Germany upon innocent Jews.

Markowicz deftly reveals the beauty of a spiritual existence, the warm devotion of a loving family, and then the terror of brutal genocide. Although this is a memoir, we might have anticipated some additional character development along the way. This book would also have benefited from the addition of maps, diagrams, and pictures. Perhaps this can be added in a second edition. With at least two other books carrying the same title as this one, a subtitle would have been helpful for marketing differentiation. Such matters might have been addressed by the editor prior to first printing.

Still, the writing flows smoothly. Markowicz’s astute descriptions provide abundant details, revealing the robust psychology of his circumstances. His historical descriptions are remarkably accurate and insightful. This is a riveting story of family, faith, terror, and fulfillment. My Three Lives is a thrilling, compelling memoir.