My Stripes Were Earned in Hell: A French Resistance Fighter's Memoir of Survival in a Nazi Prison Camp 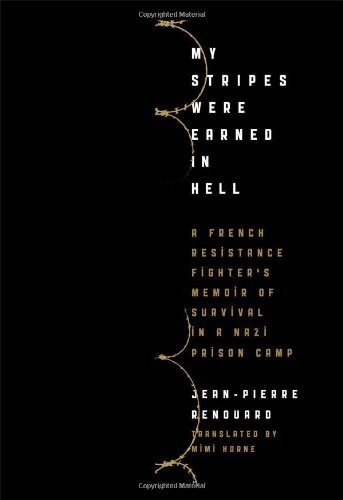 “This genuine record of Nazi terror stands as a powerful literary achievement . . . a superb reading experience.”

This is the memoir of Jean-Pierre Renouard, a French gentile imprisoned in Nazi labor and death camps during WWII.

As an adolescent underground fighter, Jean-Pierre Renouard was captured by the Gestapo in 1944. Initially sent to the prison camp Neuengamme, in Germany, he was transferred to several other camps, including the Misburg sub-camp and the infamous Bergen-Belsen.

The author’s vibrant descriptions include forced labor, starvation, brutality, and genocide. This genuine record of Nazi terror stands as a powerful literary achievement, with fragmented but eloquently described events.

Along the way Mr. Renouard encountered, befriended, and assisted many memorable fellow victims. The vast majority perished from sickness or starvation or were murdered. Mr. Renouard’s record provides them a lasting legacy.

My Stripes Were Earned in Hell captures the interminable, courageous, and ceaseless human effort to survive against the terrible Nazi campaign to destroy human life.

Mr. Renouard was not a Jew. Yet he and his compatriots were subjected to the same inhumanity Jews experienced.

In a heartrending manner, against the backdrop of unforgettable prisoners who befriended, supported and admired each other, this memoir describes the depth of Nazi perversion dealt to anyone deemed unfit.

If the book has a glaring shortcoming, it lies in the fact that each fleeting segment constitutes only a couple of pages before the author moves on to a different event. The reader is often left desiring more detail, enhanced character descriptions, and deeper exploration. The book would also be enhanced with pictures, maps, and diagrams. To the publisher’s credit, it is wrapped within a handsome hardcover with a descriptive jacket.

My Stripes Were Earned in Hell reads like a novel. It is an outstanding and inspiring example of one man’s triumph over insufferable conditions and his courage to survive, making this book a superb reading experience.