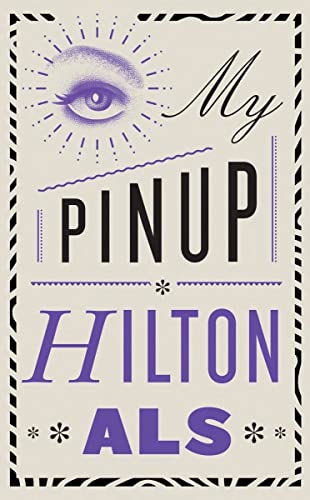 “My Pinup may be brief, but it is amazingly rich, more a prose poem than a conventional essay. . . . My Pinup is a gem.”

Hilton Als’ “paean to Prince” first appeared as an essay in Harpers magazine. It is thin for a book (a small 48-page volume), but Als, a Pulitzer Prize-winning essayist and critic whose work is always passionate and fascinating, covers a lot of territory from Black homophobia to white racism, from Prince’s early appeal to queer Black men to Als ‘own experiences of love and loss.

Als begins by recounting a 2002 routine by comedian Jamie Foxx in which Foxx, while repeatedly asserting his heterosexuality, admits to an attraction to Prince. While looking into Prince’s eyes opens the possibility of desire and love between Black men, Foxx’s routine demonstrates the fear some Black men have of that desire.

For Als, Prince’s career trajectory reflects the same nexus of sexuality and homophobia as the star morphed from an androgynous, queer performer loved by Black queens to a more straight figure white fraternity boys could dance to and, finally, to a devoted Jehovah’s witness: “He was like a bride who had left me at the altar of difference to embrace the normative.” Prince is the ambitious queer boy who sold out to the straight white establishment.

Yet Prince, for Als, remains an object of desire, still very much alive even though Prince died of a drug overdose in 2016. The closest Als comes to alluding to Prince’s death is a statement that he no longer resides in Minneapolis. He is very much inside of Als’ psyche, the fantasy lover who betrayed him as well as a Platonic ideal.

Prince is very much a presence in this little volume. There is a long section on Als’ backstage meetings with Prince in Saint Louis, where the musician first invites Als to collaborate with him on a book, then wants to talk about Jehovah’s Witnesses. Nonetheless, My Pinup is more about Als—about one queer Black man’s real and imagined relationship to an artist whose career spanned much of his life. How many queer men white and Black, raised in an earlier, less accepting time, have their Princes, icons who became receptacles of their desire and imagination, their companions, and antidotes to loneliness? For Als, Prince represents “coloredness and complicated boyness.”

The essay is also about how Als’ lovers, white and Black, don’t measure up to his ideal. There is the white lover Als takes to a Prince concert along with a peach pie he baked. He wants the lover to share Prince and the pie with him. However, the lover kept talking about himself, sharing neither Prince, the pie, nor Als’ feelings. Finally, there is the Black lover who resembles Prince, but who leaves Als for a white woman. Als sees this lover as a version of Prince and remember himself trying to be both nurturer and Dorothy Parker, poet and wit, for this man.

My Pinup may be brief, but it is amazingly rich, more a prose poem than a conventional essay. After finishing page 48, this reader went back to the beginning and read it again. So many finely wrought perceptions stand out. As in all of Als’ work, one encounters a brilliant complex personality—angry, sad, but still celebrating of the possibility of love, of “colored boys together.” My Pinup is a gem.